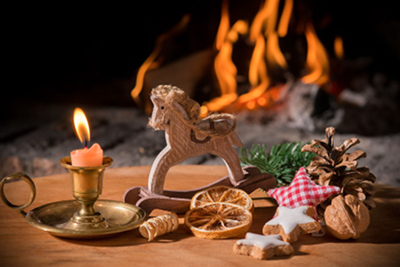 “We knew nothing of the toys we see nowadays.
All such were then homemade, if there were any.
I do not remember to have seen one of any kind
when I first knew Xmas.
But we were just as happy then as now.”2

We have come again to Xmas Day.3 It was unlike any that we have seen for thirty-six years past in one respect, at least—none of our own family sat down to eat with us or gathered for the home observance. Yes, we were lonely in that respect, and could not make it seem like the Christmases of olden time. Son and family are in Chicago;4 Daughter and her boys5 are in their new home at McCallsburg, Iowa. I don’t know whether or not we can ever make Sunnyside6 seem the same again. How different the presence of those we love makes any locality seem to us! Thirty-six years ago, in our first home of our own,7 there was a little baby boy who attended his first Christmas on earth, and he thought so much of us that he passed by all other homes to be with us. Year after year he still attended our family tree. After a while, in due time, he brought a dear young girl8 with him and there was double joy. A few years later and they had a home of their own and their own family tree. So the separation came which remains today. But it is one of distance, not of separated hearts. Later Daughter followed the pathway of the son. After a while death came to her husband,9 and so for years the mother and the two boys have always been with us till yesterday, and never failed; nor has the observance ever been omitted. Fortunate, you say? Yes, so we feel. But the fortunateness does not take away the sense of the past unbroken possession. How much we talk about our homes and prize them, when in fact we do not so much mean the house and surroundings and appointments, as the dear ones who live there.

As Xmas Day dawned it was beautiful. But there was no call for early waking, as often in the years that have gone. There was no stir of children feet and voices. No rattles, and horns, and drums sounded the early opening of the day’s gladness.  Wife10 did not care to rise early. As the day opened there was no “tree” in sight. No stockings hung up. It was all very quiet. Just Wife and I.

Well, Wife and I had breakfast as usual. At prayers we remembered those not present, and gave thanks for the day and the Unspeakable gift.11 The white grapes Daughter always liked so well stood on the table as usual. There were figs and candies. A graceful wreath of holly and Xmas moss graced the hall door. In the sitting room (it faces the southeast, or, rather, south and east, with a window in each, the one in the south being a wide one), the Golden Bell Abutilon which we took up from the garden in the fall, standing about four feet high by the east window, greeted us with its first blooms for the winter: three fine bells of gold; and in the south window the Nasturtiums, now having climbed to the top of the window, were also in bloom. The beautiful sun shining through their luxuriant leaves made us think we might be in Florida. Beyond the window, however, the view corrected all such illusion. There was the melting snow and ice. Winter ruled as winter rules in Iowa. And this was our Xmas morning.

We dinnered with some friends where we had been invited. It was kinder of them than they may have thought, as we were not left so long to remain amid the memories of the past. All day our hearts have been going elsewhere. How the heart will go where its treasures are!12 The farther one goes along the journey of life, the greater grows on one the reunion idea of heaven. And with the increase of this thought there comes also the loss, in many respects, of our earlier attachments to place and local surroundings. I am wondering if this is not a law of a kind of exchange by which all earth ties sooner or later will be wholly absorbed in anticipation of the oncoming Reunion, and the past shall in a large measure die out of the realm of desire!

I was thinking the other day of the Xmastides of olden time, when I first knew them. Yes, that was over a half century ago. We lived among the hills in Southern Indiana then.13 The winters were not so severe as here.14 The grand forests were still there in their beauty. I loved them then, though I did not then know it. Around the fields by a winding road, with the fields on one side and the grand old trees on the other, we made our way to the old log schoolhouse. The giant yellow poplars were still there. Oak and beech, black walnut, sugar tree, hickory and ash gave them companionship. Dogwood and sassafras and pawpaw filled in with lower growths. Occasionally, at impossible heights, save as the tree was cut down, was a bunch of mistletoe, which, contrary to the usual order of plant life, flourished in the chill midwinter air.

But that old log schoolhouse, beside the field! How I would love to see it again! How we used to rally there with all our young lives wrapped up in the life about it! It was the center of all our attractions. The spelling schools! The debating societies! The closing day entertainments. Yes, we even had Sunday school there. So that to us in those days in country life it was college, lecture association, literary drill, and, in fact, our great world of attraction outside of our homes. But now! The boys and girls, where are they? Nearly all “lost to sight,” but not “to memory dear.”15 So many sleep the death that knows no waking. How dear their names sound yet! A few remain, but we seldom ever meet. Only a few have I seen in a half century. I remember we had our troubles, our miniature quarrels, hard feelings, likes and dislikes, yes, and loves, too. As children we were prophesying what in the main our future would be. We have all been going over the road since.

I remember with what interest we hurried to school Xmas morning, for we usually counted on that day as on no other at school. Not much study that day, though we all went through the motions. As was customary in those days, the teacher was supposed to “treat” the scholars to candy, which was by no means as common then as now, or apples, nuts, or something of the sort. Woe be to the teacher who refused. Sometimes he was shut out of the house, or “barred out,” as we called it, and we would not let him in till he promised the “treat.” Sometimes there was trouble, but usually it was a day of great gladness, and a holiday to us such as the whole of the year after that never afforded.

It seems to me I can see the enchanted look everything had at such times, even yet. The fresh new book seemed like a great library. The sticks of striped candy, how they shone in resplendent light! The trees looked taller, the sunshine brighter; the snow, if we had it, did not seem so cold. The mistletoe high up in the treetops seemed never so green. The moss on the old logs in the forest was having a veritable May Day for all its kind. We knew nothing of the toys we see nowadays. All such were then homemade, if there were any. I do not remember to have seen one of any kind when I first knew Xmas. But we were just as happy then as now. All our present expense and fuss and fine displays have not added one whit to the happiness of the children. Oftentimes I doubt if our “giving” so much to our own, who may not need it, is the best thing after all. Instead of overdoing in this respect, the needy should be hunted out and made to share these benefactions.

Next post: 4th Sunday in Advent – The World Is Grown Old