On December 25th we celebrate missions. Missions!? You probably thought I’d say, “Christmas” or “Jesus’ birth” or even “the Incarnation.” All of those are valid an­swers, of course. But have you ever thought about all of those as very im­por­tant sub-topics under the topic of mis­­sions, specifically the Great Com­­mission? 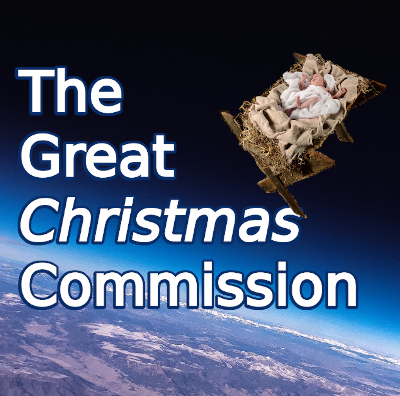 The Great Commission? Isn’t that the man­date Jesus gave His disciples in Matthew 28:18-20? That’s when they became full-fledged apostles, right? “Apostle” — apóstolos in Greek — is just the noun form of the Greek verb apostéllō,2 to send some­one out, to send a message. So the word apostle means nothing more — and nothing less! — than a sent one. Take away all the historical and ecclesiastical trappings that have barnacled the word “apostle” for millennia (not to mention the modern-day abuse and mis-use of the word in certain circles) and we get back to the word’s original meaning — a Sent One. In church-life terms, the closest common synonym we have today is missionary — someone sent out on God’s Mission.

BELOW:
UPDATE ON WHAT’S BEING DONE
WITH THE RELIEF MONIES
YOU HAVE PROVIDED

For the last few newsletters we have focused on photos from Latin America related to distribution of food and other essentials. But there are other great needs, like helping new church-plants with support and building materials. El Salvador and Guatemala are two cases in point. In Perú, we’re focusing on raising the $10,000 necessary for someone’s much-needed spinal surgery.

In El Salvador, superintendent Francisco Olivo (below, right) knew what to do with the funds we sent him. In their COVID-devastated economy, he had a bi-vocational church-plant pastor who had lost his job. Francisco felt led to give the entire amount (one of the smaller gifts we have shared) to Jose Luis and and his wife Reyna. 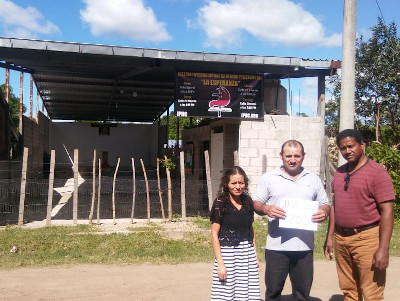 I'm sure they all wish that they could have put the monies towards the $300 they need to run electrical service to their partially completed sanctuary. (Right now, they “borrow” power from a sympathetic neighbor.) And they need to replace their pole-and-barbed-wire “front door” with something a bit more conventional and secure. But first things first — survival!3
PERÚ: We’ve got your back!

You saw in a previous newsletter the food dis­tri­bu­tion made possible through the Lima, Perú church. But an expensive spinal surgery has been needed for some time for a sister, a pastora. Even with medical insurance, $10,000 is needed before she can be admitted. (I have a copy of the surgical cost-estimate from the hospital.)

Into this void stepped a friend of nearly 50 years, someone delivered from this same chronic back pain by the same surgery. This person was moved to give — several times in fact. Let me share superintendent Watanabe’s responses: 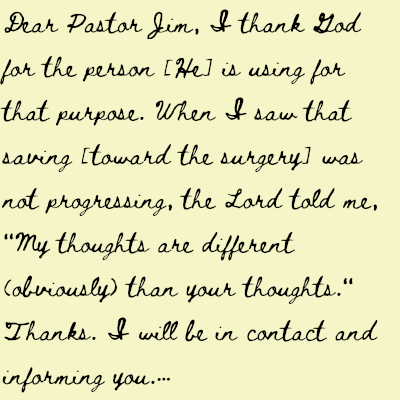 And after the last donation towards the surgery, the largest yet, which brought us to the halfway point…4

Despite COVID-19 losses and economic hardships, the Guatemalans press forward with the Great Christmas Commission in view. Have you ever heard the the phrase, “First you need to put a roof over your head”? Well, that’s what you've helped two mission outreaches to do in… 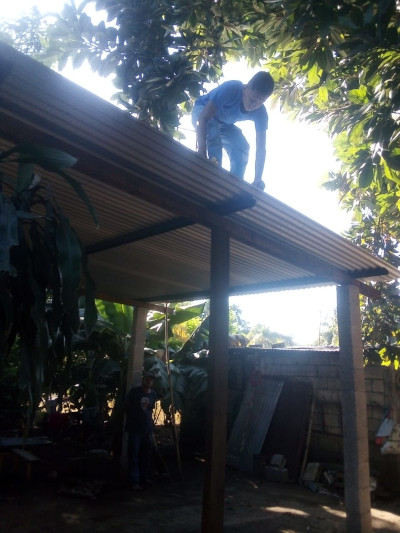 …and in Las Palmas, Coatepeque 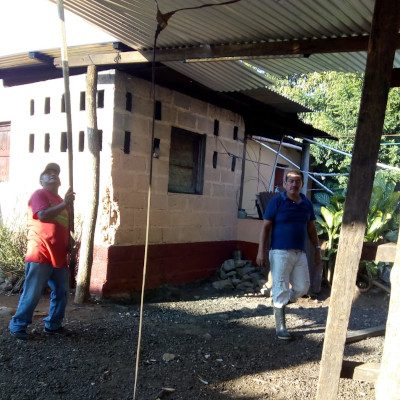 Sipacate is a fully established church with a building, but it was in need of bright, economical lighting. They have it now, thanks to brethren who have donated. 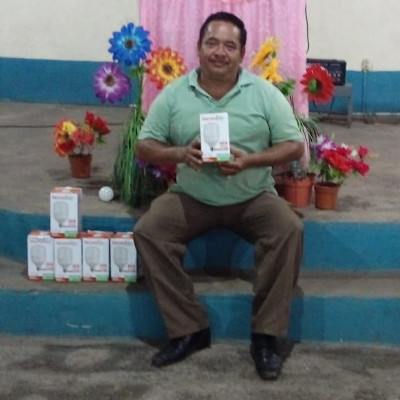 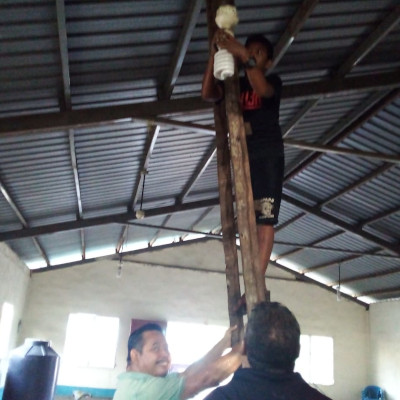 No, that homemade ladder doesn’t reach the rafters, and, yes, that pastor IS supporting the ladder! In Guatemala, they don't have OSHA, but they DO have strong pastors!5

Jesus didn’t launch a new-fangled Great Commission after His resurrection, just before His ascension. He merely passed on the Commission He Himself had received. He was sharing and iterating on the Great Christmas Commission, when the Father commissioned and sent (the verb is apostéllō, as we shall see) the Son to the most foreign place a heavenly being could experience: a primitive dimension bound by time, space, distance, physical limita­tions and a culture fraught with language barriers, religious traditions, social taboos, self-centeredness, sin, pain, sickness, death, a place very distrustful of and dangerous to outsiders. (Anyone who has gone to the mission field for any length of time may relate to a certain extent.)

Yes, the Logos, the Son, was God’s Mis­sion­ary, His Apostle, His belovèd Sent One to lost people — an entire world of them. The “Apostle Jesus”? Sure! Even Scripture tells you that you must “consider the Apostle [apóstolos, the Sent One] and High Priest of our faith” (Hebrews 3:1)! So have you “considered” Jesus’ role in this regard? And did you know that the verb apostéllō keeps appearing in passages about God sending Jesus?

That Baby in the manger was the Spear­head of God’s mission to save you and me. But that Baby grew to be “the Man Christ Jesus,” our Savior-God, and He is the One who invites you to be part of the Father’s Mission, the Great Christmas Com-Mission that appeared to the eyes of men on that first Christmas morning. You probably know “the Great Commission” verses by heart, but do you know these?

Have you ever met a second-generation mis­­­­sion­­­­ary, that is, a missionary whose parents were also missionaries? There’s something unique about them, especially those who were raised in and now serve in the same adopted country where their parents served. These second-gen’ers were conceived in the culture, absorbed it placentally, imbibed it from their mother’s milk, grew up effortlessly bilingual (and, often, multilingual) as naturally as breath­ing, and know how to “think like a native” because they are “native” in the best sense.

They differ from their adopted coun­­try­­men in one key way — they understand and em­brace their role in proclaiming the Good News of the Kingdom of God and salvation in Jesus Christ to those around them.

Similarly, Jesus was born into our earthly cul­ture. He became one of us to live out the Great Christmas Com­­mis­­sion. But He did what we could never do — live a holy life in order to die and make an atoning sac­ri­fice for all mankind. The Incarnation al­ways had the Cross in view, along with the Father’s loving invitation of re­­demp­­tion, salvation, and healing to “who­­so­­ever will” respond in obedience and faith to God’s call to repentance, forgiveness, cleansing, and that partaking of the Divine Nature — New Birth.

New Birth! Please consider this closing thought about how being “born again,” “born from above,” fits into the Great Christmas Commission. Like the Child in the manger, you, too, have become “new­­born babies” (that’s Peter’s phrase in 1 Peter 2:2), “partakers of the divine nature” (2 Peter 1:4). But also like the Christmas Child, your physical and tem­por­al location after your New Birth is in the midst of a culture that is alien to the truth of God, His laws, His Kingdom, and His salvation.

The Father would love for you to realize that you are an “apostle,” a sent one to your family, friends, neighbors, co-work­ers, fellow students. Yet you have the ad­van­tages of a second-generation mis­­sio­­nary — you already know the language, cus­toms, and thought-patterns of those around you. You are “one of them” because, well, you are one of them! You don’t need years to raise support, to study the language, and understand the culture.

Let your heart and mind and un­­der­­stand­­ing and worship expand this Christmas as you contemplate the wonder of God Incarnate in swaddling clothes. See the festivities in a new and more strategic light — you are kneeling and adoring beside the manger-cradle of the Father’s “Apostle,” the Sent One of the Great Christmas Com­mis­sion. Carrying out that Commission was (and still is!) the great focus of His life.

And as you “walk the short distance” from Christmas Day to New Year’s Day, perhaps the most practical and “reasonable act of worship” (Paul’s phrase in Romans 12:1) is to pray to this Sent One to help you realize your role as a “sent one,” born (and born again) into your time and culture for God’s great purposes. Pray that we all might be empowered by the other Sent One — “the Holy Spirit sent [apostéllō again!] from heaven” (1 Peter 1:12) — to fulfill our assigned roles in the ongoing Great Christmas Commission!

A Merry Christmas, Happy New Year, and much love in Jesus to you,

Next post: If Thou But Suffer God to Guide Thee