The Perils of Postmeridian Life 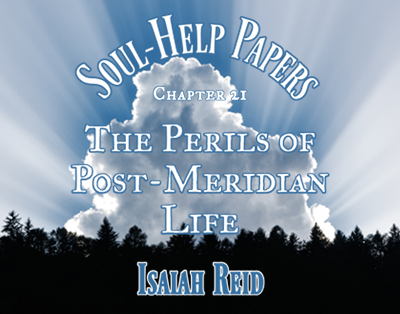 “If the soul relaxes, and advance ceases,
then the life atrophies
and perhaps even fossilizes.”2

Noah, David, and Solomon are fair samples of a dangerous period of the latter half our earthly years—postmeridian3 life. Each of these men seemed to have a fair record from the early part of his life. There was not an early period of “sowing wild oats,” and then a break as a consequence. Yet breaks came. As to both David and Solomon, we have early records of Divinely-attested character. In early life they were men “after God’s own heart.”4 It was in later life when the falls came which marred character. The only break that came in Moses’ life was not in youth, nor in his forty years of schooling in Egypt, or his term in God’s Wilderness University, but in the heat of the battle in the last section of his remarkable years.

We have usually looked upon youth as the great danger period in a human life. It doubtless is in the shaping of character, but it cannot be in the testing of character. Innocence can hardly be said to be character, for in youthful innocence there has not yet been much chance to test out how much strength of character it has. Weight on the beam proves how much it will bear and establishes its value. Youth has many bids for going this way or that, but some of the greater tests belong to the postmeridian years of life. Moses withstood much in Egypt, but surrendered to impatience later,5 after many wonderful experiences. Noah remained a preacher of righteousness6 for one hundred and twenty years, and then failed with the juice of his own vineyard.7 David withstood envy, deprivation of place, expatriation, desertion by his wife, and the testings that belong to the throne; yet he failed through the attractions of a woman.8 Solomon, whose early career was marked with special wisdom and moral enthusiasm and heroism, like his father, lost the higher ideal through his love for the fair sex.9

We need not rehearse the incidents of our own day in nearly all avocations, professions, countries, and civilizations. The burden of proof does not invalidate the fact of salvation, but does show that there are dangerous elements in the life of youth and middle manhood which still remain, awaiting the test of life’s postmeridian days. A little time spent considering these matters may prove very profitable.