Concerning the Undesired and Unexpected in Life 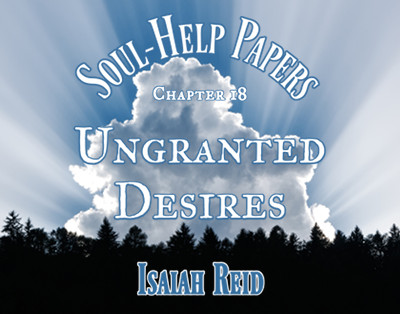 Presence with God is greater
than a past scaffolding of life
retained with God afar off.2

If we notice the story of the lives about us, not to say much of our own, we see there enters therein much of the unwelcome and unsought. Life goes not in the expected, but in the unexpected channel. The road seems to turn almost directly from the route mapped out for it. All predictions and prophecies seem to have miscarried. Expectations have not been realized. Life has not brought or fulfilled expected prophecies. The soul is thrust out—all unprepared for its surroundings—into what appears to be a barren land, and all roads run crosswise and contrary to every expectation.

Let me clothe some real life under different names and embellished, but nevertheless real, circumstances. Facts will still be facts and relations real relations, even if names and localities are changed so as to avoid personalities and unkind reflections. Anyway, give me the benefit of thinking I am not dealing in the realm of imagination.

In 1878 I knew a beautiful young life, full of hope, bright with promise, well cherished in a well-ordered Christian home, and just starting out in life’s career from the last days of school life. On every side promise seemed bright, with unusual indications. Health was perfect in every respect. There was beauty of person and beauty of life. There was charm of manner and queenly bearing of being and spirit. No sign of dissipation, no wasted energy, no sign of inherited disease marred the glow of health and physical movements of body. After a few years this fair young life found a lover and companion in a schoolmate well known and respected. Both were Christians. Soon they married. Life moved on, as it usually does under such favorable circumstances, in love and harmony. After a few years the husband began to show signs of failing health. Alarmed, they sought the higher elevation and purer air of the Western mountains. The relief was not sufficient, though it retarded the progress of the disease. After a while there was a grave on the mountainside, and a lonely-hearted wife with a sweet little daughter. The unexpected and undesired had begun to come into a life for which there seemed, to human eyes, to be no reasonable excuse. The demon of drink or some other miserable demon often comes in to wreck lives, but here there were no apparent signs of the past uncovering themselves to mar the ongoing of these lives. Still the overshadowing came. The incomprehensible sorrow and separation thrust itself in as an apparent intruder. Life’s fair vision faded. The crossroads came into life all unexpected. When there are no past records coming up as the cause for such sorrows, life, though sobered and full of sorrow, is never crushed in its resources. Sanctified sorrow gave richness to that life and deepened its spirituality. Under straitened circumstances, and thrown more on its own resources, it rose as out of partial oblivion into larger womanhood, wider effectiveness as a Christian, and an active place as a breadwinner. Life seemed to enlarge under the pressure.

After a number of years she married a man of former acquaintance, of a good family, and a professed Christian. Life for a long period seemed only real lover-life retained in family relationship. A few years more, and for what cause I know not, there came diverse feelings. The love-bond weakened. Alienation more or less entered. Somehow the broken links could not be mended. There seemed to be no “third party” interference or other common cause of this state of things. Again the unexpected had come into this life. Again the crossroads had come where they were not expected. Again love, which is life’s deepest and most essential life, suffered, and with it hopes and plans failed, so that life seemed a kind of riddle and perplexity. Unable to pray through it or work through it, she seemed tossed hither and thither in an uncertain sea and contrary winds. The horizon seemed full of storm, and the golden days had passed. Again had come the undesirable and the unexpected.

This is no fanciful sketch. I perceive that undesired and unexpected turns are very common experiences, with variations to suit the individual circumstances of different people. It is easy to ask, “Why all this?” It is harder to answer. Perhaps man cannot answer. Perhaps the tried soul cannot know the reason at the present time. Probably God hides the reason for a cause that shall appear later. Allow me to suggest some points for consideration in studying such cases.