“The earth is full of heaven,
And every common bush afire with God.”2

“True spirituality is to see the divinity in common things.”
— Drummond3 — 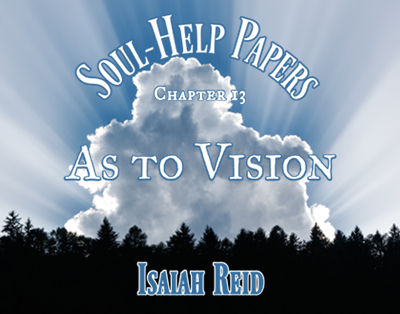 How we can reach and retain the seasons
of “open vision,” is a matter to which we give
far too little attention. 4

Power to look, not at, but through, the things that are seen, is the “vision sight.” Have you found days when your soul seemed to have power to transform almost everything about you, and the commonplace was shown in a new light, and the ordinary was all transfigured? Well, have you ever been able to explain how this was? Have you found any way to bring about and retain this vision condition of the soul?

As for me, I have not, though dimly I seem to have an outline in the dawning of the growing light. Certain it is that the greater the soul’s victories over the body, and over evil, and all sin, the more of real vision life we have. I do not mean by “vision” a kind of dream one may have when not asleep; but that new, transforming view we sometimes have in which common things are transfigured before us and no longer look the same, while to the senses they are the same.

It may have been in the morning after you were converted, or at the time of your entrance into Canaan,5 that the trees, and clouds, and the very blades of grass, all shone in rainbowed light and set to praising God. Vision is not so much what you see at such times, as the power to see; it is the attitude of the soul to perceive at one time what it cannot at another.

At a tabernacle meeting6 held several years ago, I had rather a remarkable and prolonged occasion of this blessed condition of soul. For some time previous, the going had been heavy, and everything only ordinary, along the plain line of duty. My whole being was reaching out. It was a few words in a letter, I think, which were the first notes in the awakening out of the common into the uncommon. So much we may do for one another by a few strokes of the pen, when a full heart is behind it. The circumstances of the meeting were only as usual. In fact, there was no special tide in it. The meeting, as such, was only the place, not the cause, of what came to my soul. We were on the open prairie, and as I looked out toward the west, where the Master had painted a glowing picture of sunshine in cloudland, the natural beauty seemed to change into that which is beyond nature. The colors intensified and deepened and shone in such light that “glory” was the only word by which I knew to describe it. All at once I knew my soul was “on the victory side.” I wanted to sing and sing and re-sing that song, of which this is the refrain.7 At the same time I knew everything to be in pleasant relations, and the going easy and blessed. My soul “walked on wings.” I seemed to be “where I wanted to be, and did not want anything,” unless it was just more of the same. This remained for days. I could not look up to the skies without my soul melting at the intensity of the deep blue. As I looked up through the opening among the leaves of the trees, in a camp which followed, the glorious vision would burst on me with the mere sight of the sky. All this time it was easy to preach, pray and sing, and work was play, and all was peace and blessing.

Such ability to see, to feel, to recognize, to understand, to enjoy and appreciate, I apprehend as vision. It is not an unconscious state like a dream, nor a trance in which the physical powers are held in abeyance, nor a mere reverie. The spirit is exalted. It seems liberated in a measure from its holdings in the clay tenement. It sees with the soul’s eyes and hears with the soul’s ears, and understands beyond the domain of sense perceptions. A sister speaking of such an occasion, said, “Everything looked so beautiful. The light on the river and its banks was indescribable.” Afterward when the vision had passed, she was accustomed to refer sadly to what followed, as a time “when the light on the river had faded.”

How we can reach and retain the seasons of “open vision,” is a matter to which we give far too little attention. We seem to have relegated such times to the mere accidental and circumstantial, as if they were out-of-normal-order spiritual comets in the soul’s moral heavens. We may not be able to spell out the proper metes and bounds8 in this land that borders our materiality, but we recognize that land as ours. We are of it, though not yet fully in it. There we become more than our ordinary selves, and move beyond our common conditions. We are at our best, then, in more senses than one. Particularly is the spirit highly sensitized. We are open to holy suggestion and communion. Prayer is a new inspiration. Work is our normal condition. We reach results by insight rather than reason. We know by inside sight. We love by the heat of a new inward fire. We touch infinity on all sides. A whisper of the Spirit is more than thunder at other times. Speech is golden and silence exquisite. The “willing soul would stay in such a frame as this,”9 but after being caught up by the Spirit, we are found, or find ourselves, at some commonplace Azotus, like Philip,10 and pick up again the ordinary thread of life’s going by the way of toil, trial, and agonizing to keep the way of the kingdom. We can never be quite the same again. We have seen that which transformed us. We have heard that which inspired us. We have touched that which endued us with power.

Yes, at such periods we are at our best. Therefore we should know more about how to reach and retain these spiritual uplands. But who can tell how? Allow me to suggest, that body, soul and spirit—or body, intellect and affections—must be all more or less at their best. Specially must the soul walk in whiteness, the mind trust in confidence, and the body obey the law of the Spirit, for us to operate within this place of vision.