Out of the Good Into the Better

“The righteous perisheth, and no man layeth it to heart;
and merciful men are taken away, none considering
that the righteous is taken away from the evil to come.”
— Isaiah 57:1 — 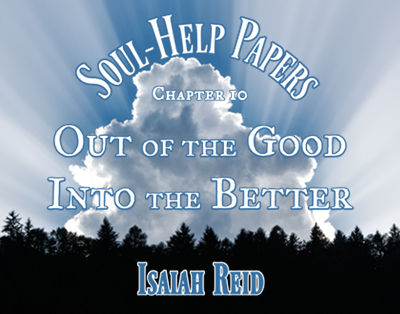 Let the step into the beyond be held in the thinking
not as a compulsion, but a release.2

Looking at life as we do, and clinging to it as we must while we stay, we fail to catch this cheer and comfort, that a righteous and merciful man in dying does not meet a calamity, but has a release from further continuance in the school of adversity, and from contact with the evils and all the sorrows of life. God has said, “To the merciful Thou will show Thyself merciful,”3 and good as His word, the Lord, out of His loving and tender mercy, excuses some from further service where even after “threescore years and ten,” the strength of life is but “labor and sorrow.”4

Before, the hosts of sin seemed on the victory side, but now, righteousness and mercy begin their innings, and find their possessions and inheritance. Looking backwards, such an one sees the retreat of an old world, full of many precious memories it may be, but still portentous with storm and undesirable circumstance. The world is like a storm cloud in early summer, that in passing has rent the forest with storm and driven the toilers affrighted from the fields, but now is lying in the east with a rainbow inscribed on its retreating darkness and with the glowing sun breaking full on its western side; so looks the world, to the surprised and excused saint. The storm is over. It lies forever in the past. He is excused from stormland forevermore. Taken away from the possible coming cyclone with its blare of lightning, deafening thunder, pelting hail, drenching rain, and unroofed and demolished homes. Taken away from the evil to come!

Mother, weeping for your sweet babe, that so lately was and now is not, this comfort is for you: “Taken away from the evil to come.” Wife, looking out into a cheerless, lonely, bewildering future, hear these words whispering through the dawning days of widowhood: “Taken away from the evil to come.” Child, facing years of earthly orphanage, hard as the days may seem to you, let the thought of mother’s being taken away from the ills that longer stay would have entailed on her comfort you as you accept your lot and go on building a righteous and merciful character out of your sorrows, hard lot, and pathway of trying experiences. You, sister, bereft only a short time since of all the sister you had in this world, who was always so much to you since mother bid you goodbye in the early dawn of young womanhood, remember these words of the prophet. It is as if God said, in all sweetness and kindness, “Oh, my child, weep not. Dry thy tears. Listen to me a moment. How could you ask your sister to remain longer? What have you had to go through yourself since? Her life might have been for her tenfold harder. In mercy I took her ‘away from the evil to come.’ Think not it was out of the dark into utter darkness, but out of darkness into light. Out of storm into sunshine. Out of pain into rest. Out of the misunderstandable into the enlarged vision and glad satisfaction. Sorrow not for the promotion of the saint, but rather that thou art not yet through thy school life. Lean hard on Me and find comfort in all thy bereavement.”

To the good (the righteous and merciful), no evil can come in the procession of untoward circumstances. It is not in the terror of the cyclone. It is nowhere hid in the things that stalk amid the dark ways of pestilence. It is only when we must reap the fixed rebound of some past unfaithfulness that we cry out in the sorrow of our Gethsemane, “My God! My God! hast thou forsaken me?”5 The trial is only the gloom of the passing storm. It is the shadow only, and not the substance, for God cannot forsake a trusting child.

The “valley and the shadow”6 are not the substance. It is not to be brooded over as such. Put it in the light of the text, and make it the pathway out of darkness into eternity’s dawn. Think of it as a gateway out of the good into the better. We give death an undue power over us by allowing him to hold us subject to fear of him. Consider him as a conquered monster, and forever powerless under the shadow of the cross. Let the step into the beyond be held in the thinking not as a compulsion, but a release.