And God saw their work [the Ninevites’ repentance in sackcloth and ashes, and fasting], that they turned from their evil way; and God repented Him of the evil that He said He would do unto them; and He did it not. 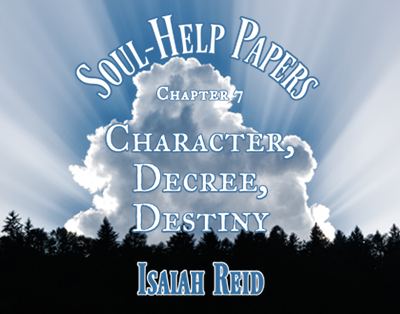 An infinite mind must needs adapt His language to the comprehension of a finite mind, since the finite cannot fully comprehend the infinite. God speaks to us in the language of men. He puts things as we see them. He cannot repent of a thing as we do, for the God of all the earth cannot do either a wrong thing3 to repent of or an unwise thing to change. All His attitudes towards wrongdoing and right doing are fixed and settled. He changes not,4 for He needs not. When He speaks of changing and of doing what He said He would do, the language is from the human point of view; that is, looking at it as we see it.

These Ninevites were on the certain road to wreck and ruin. God had said the destruction was certain and near at hand. The road they were on would bring them to it within forty days if pursued. The prophet warned them. They believed God and turned at once out of and away from that road. So they did not come to what God had said would come forty days5 further on that road. It appeared to men as if God had changed His mind. But He did not. His mind was the same. The people changed, and to them it seemed as if God had; the words of the text are written from the human viewpoint, and there should be no trouble in understanding them.

Practically, it matters not whether or not we understand all about it, provided we go over on God’s side. Doing that, it may appear to us as if God has changed because “His anger is turned away.” 6 We have changed, not God. When we “break off our sins by righteousness,”7 we see God in a new light. As the world all looks new to a sanctified soul, and yet it is the very same old world; the trees all seem to clap their hands and have rainbows on them, but are only the same trees; so God seems to us to have changed when we go over and look from His standpoint. So we usually speak of it when we tell others. And so the words are phrased in the wording of the book of Jonah.

The thing of greatest importance to us is the fact that God’s administration to us is according to our attitude toward Him. With my back to Him, my pathway is in the dark. Facing Him, He is a lamp unto my feet and a light unto my path.8 Sin brings us to see the judgment side of God’s government. Obedience brings us to see His sunlight and blessing side. In the true sense we make our own sunshine or midnight. Destiny is not so much in a sovereign decree of God covering me as an individual, as in the pathway I take. Which road I travel fixes my destiny. There is a sunshine and a shady side to each mountain. There are ever before us two roads, either of which we may take. The decree does not affect my choice, but pertains to the road. It is decreed that the wrong road ends in darkness and perdition, and it is foreordained that everyone going the length of that road shall find the wrath of God. But it is not decreed that any soul shall go there irrespective of his will in the matter. Decree belongs to character and not to the individual. The individual builds his character as he chooses, and in so doing becomes responsible for and shares its fate.

The old Ninevites saw this. They had the warning and the privilege to go over to the sunlight side of God, and they really and truly did so, so that what He said would befall them on the dark side never came to pass. What God said was true. Man changed. God did not. Man fixes his own destiny. The law is always the same. In olden time Jonah brought the warning to the wicked city. It was a real “new thought” to them. They took it up into their thinking. They translated it into action. Their action brought them on the sunlight side of God, and there in that land of light and song was no destruction. They changed roads and shared the destiny of the road they followed. So men do now. God changes not. We may if we will.

The law of destiny is this. Suggestion brings ideas and thoughts. We may receive or reject them. They may be good or bad. If we receive them and endorse and follow them, we share their destiny. If we harbor a thought, it will soon bloom with wishes and desires. Soon wishes and desires will come to purposes. Purposes end in acts, and acts fix character, and character fixes destiny. God decrees the destiny of each kind of character, but we build the character, and the destiny follows according to kind.