God’s Way Or My Way? 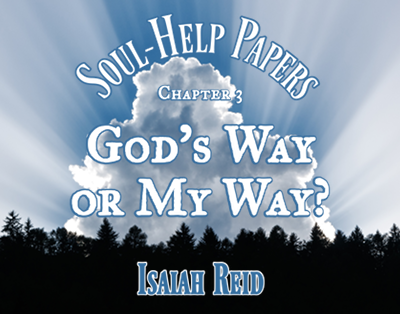 Even measles can be a blessing that God can use
to alter the course of a life.2

I suppose it is one of the hardest lessons we have to learn, that adjustment to God in spirit and in providence is the true way to happiness. Usually we are so full of our own way and purpose that some of us have, like Jonah, to make attempted trips to Tarshish, in the way of carrying out our plans, to find God’s plan. At any rate, it is a great revolution to exchange our plan for His. In doing so, He may, and often does, “make us willing in the day of His power,”3 even though He “leads us by a way we know not.”4 And why need God lead us by a way that we see?  We usually cry, “I can’t understand all this! I don’t know what God means by it; if I could only see why He does it, then I could be satisfied.” Our choosing our way is one thing; His directing of our steps is quite another thing. He disposes our plans and, though allowing us to choose our way by directions He has given, directs our feet into a way we never would have planned for ourselves.

In my boyhood days I wanted to be a worker in wood. I felt inclined that way, not because I looked over the field and concluded that was the thing for me, but rather without thought, because of inward preference. I looked with interest at every man with a saw, and watched with eager eyes all workers in wood. The thought grew with my years and strengthened by imaginary fancies of the days to come. It became a conviction after a while. Later, at the dawning of manhood, when the boy is looking out from boyhood’s last years, going, going, never to return, and life work, and life needs begin to look at us from the dawning possibilities in the rosy horizon of the coming day, I conferred with my father and a plan was made for “learning the trade.” It was then in the dead of winter. I was in school.5 There was no special need of me on the farm the coming spring,6 and so I was to begin with a good man the new work of life that I had chosen. Somehow I felt the responsibility of the occasion, that it would require of me a partial separation from home, and the very thought of it seemed to develop in me new proportions of strength. And like all young people, when put in places of trust, and where something special and new is entrusted to them, I seemed to leave more and more the ranks of the boy and grow towards manhood.

Though the school days were very pleasant, and I enjoyed them much, and felt the need of all the education I could get, they began to seem long after Father consummated that plan for me; I looked wistfully toward the end of the term. But the March days, whose coming I began to long for, had more wrapped up in them than I had dreamed, and that which would forever shatter all my air castles. What ways God takes to turn us from our purpose! It was a dull winter day towards the last of February. The little country schoolhouse was crowded with scholars. It was Friday. I did not feel well all day, and toward evening could hardly remain on account of feeling sick. There was no cause, that I knew of, why I should feel so. It was with difficulty that I was able to walk home. Once at home, I was compelled to go to bed. All night I was sick. The next morning when Father got up, after making the fire, he came to see how I was, and startled me by saying, “Why, you are all broke out with the measles!” For two weeks I was quarantined, not by the doctor, but by the measles.

When that was over school was out, the winter had gone, nearly all my classmates had the measles, and my oldest brother was down sick with a very hard attack of the same trouble. He did not get along very well, and for months his life was held in the balance. He could do no work that spring or summer.7 So I had to take his place. My plans were all broken up. It was not my way. But in the circumstances I saw that which settled the matter of what I ought to do, and I did not fret and worry over my disappointment, for disappointment it was. When the farm work was over late next fall, it was no time to go to work with the man with whom the engagement had been made, for the work for the season was over. I turned my mind towards a better education, or at least a term or so in an academy about ten miles away.8 After due time I entered into the new studies and new life before me with absorbing interest. The winter was too short. March first I had to leave school and go to Father’s assistance on the farm. It was a struggle to go, in many respects, for my heart was now in the school. I gave myself to reading all I could outside of work hours. Always at the noon hour I would read while resting.

Toward the last of May9 the corn planting had all been done, and there was a little leisure, so I took a day off and visited the academy. I shall never forget how charmed I was by what I saw. The kindly greeting of the students, their wonder how I could stay away, the sheen of the shining of the sun on the newly-leafed trees, the fragrance and bloom of the flowers, the blue of the sky that day, just never before seemed so grand and mysterious and so full of beauty and breaking with hopefulness and suggestiveness.

The academy was taking on new proportions and was to pass into a college the following September.10 The president-elect, Dr. E. J. Gillett, a wise and royal man, was on the ground shaping the classes and preparing the students for the opening in the fall. Seeing me, he asked me to call at his room, as he wanted to get acquainted with me. I had never been in the presence of a college president before, and while he made me feel perfectly at home, I considered myself more highly honored than ever in all my life. He drew out of me my wishes and desires about an education. Then he began to suggest and encourage me. Then to help me plan and open up my possibilities. When I left that room I was a new man in many respects. All the way home, as I rode on horseback, I was full of plans. My mind was fully made up, if only the way could be opened. By and by it was. When the term opened I was there. It was the turning point in my life. I remained there a number of years.11 There I was converted. There came the new shaping of life. Out of that came the call to the ministry, and the making of a preacher out of one who had looked only to carpentry and woodworking.12

So the years of my life, known only to the reader by my preaching and writing, come through a series of providential circumstances almost incomprehensible even as I look back at them. How wonderfully God has worked and how varied the means! With measles to begin the long chapter with, all unexpected; by the severe and lasting illness of my oldest brother, by which he almost lost, and doubtless did shorten his life; up through poverty and the opening of a way where there was no way; through the helpfulness and suggestiveness of the royal heart of President Gillett, and others; through toil of my own in sweeping rooms, ringing bells and building fires, whereby I managed to pay my tuition, and oftentimes doing chores for neighbors to obtain a little money for books and other incidentals; by teaching throughout the long vacations, and once by staying out a term in order to teach; and by a thousand things I cannot name now, here I am at the end of long years, unable to either tell or understand all the way I came, yet ready to testify that it is “Grace that brought me safe thus far and grace will bring me home.”13