“How oft would I have gathered thy children.”
Matthew 23:37 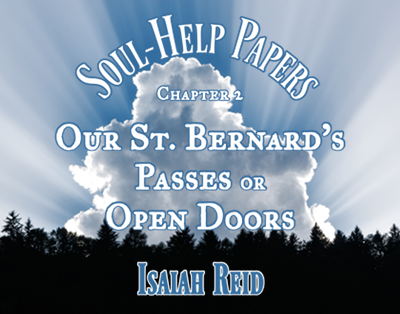 “Be strong and very courageous” to walk
through the door when God opens it.2

The other day I saw one of my schoolboy comrades. Nearly a generation has passed since we last met. He did not know me, nor would I have known him had I not gone to see him, and was told before we met that it was he. Among other things, he said, and it seemed to press him heavily: “Do you remember a talk we had in the harvest field one time just before you went away to begin your studies,3 and you tried to persuade me to go also, and I thought I did not need to? And here I am now, and have only been a poor clodhopper ever since. It was the mistake of my life.”

He had carried his age well, and had plodded through a whole generation, but like others, he had neglected the gift which was in him, and now felt the loss that can never be regained. The thought saddened me. There was a kind of a sermon that lingered in it.

How many we find doing just this same thing! Not only are they neglecting the gift, but they are actually degenerating by cultivating a gradual destruction of the gift itself. This not using what we have, and running after something we were never made for, is the synonym for sin.

Our possibilities are wrapped up in our several endowments. Failing to use our endowment unfits us for our possibilities. We fail first in sitting by the fire, moping, like Peter, when he should have been up and about showing his sorrowing Master he was in full sympathy with Him even if he could do nothing else for Him. We fail next, in not entering the doors open to us. This boyhood friend of mine could have gone to school as well as I could. His father wished him to go and was ready to send him. He neglected the open door.4

This failure to use our possibilities is a fatal mistake. Daring to do what is barely possible to the present vision is a destiny-making epoch. When Napoleon neared the terrible St. Bernard Pass of the Alps, over which he had planned to go into Italy and victory, his engineer reported the almost insuperable obstacles in the way.5 “Difficult? Granted,” said Napoleon, “but is it possible for an army to pass?”

“Then it shall be; let us start,” said the man of destiny, who dared to assert his possibilities and enter a door barely possible to success. This daring turned the scale of destiny at that time. Perhaps a thousand other men would have failed just here. Every soul has its own St. Bernard passes. My schoolmate had his that day in the harvest field, when I pleaded6 with him to avail himself of an education. St. Bernard was too high, he thought, and he has never seen Italy.

As a lad, the celebrated Fowell Buxton was most unpromising. He is said to have had no stability and as manifesting no special purpose or aim in life. Yet as a future member of the English Parliament, legislator, and philanthropist, his name and praise will go down to the coming ages.7 But how came the awakening? As usual, God used another to bring this about. There was a certain home to which he first went as a caller, and then as a visitor, where the influence was wholly noble and uplifting. How God honors such homes! In that home was the girl he afterward married.8 But in addition there was her sister, a merry, bright, thoughtful girl, who could sing and play games, but could think as well, and could see possibilities, and had the spirit in her to move others to higher planes of living. It was the stir coming from this home, and especially this sister, that spurred him to succeed in the Dublin University. It was the inspiration and effort of this sister-in-law that aroused and persisted till she awakened this man to what he afterward accomplished in the abolition of the slave trade. That was Priscilla Fry’s opportunity.9 Rousing Sir Fowell Buxton to his possibilities, she bears part with him in his great accomplishment. Had she faltered in her task, seemingly hopeless at first, she had lost her reward, and he his.

There was Esther and Mordecai. He stirred up her faltering.10 He it was who made her awake to do what he could not do. This is a rare gift some have, often entirely overlooked in the prime factors in some lives—getting others to do what we cannot. Once aroused to her high calling, once seeing the issue before her, she hesitated no longer, though it meant possible defeat. She had faith in her husband, the King. But it was a case of life or death. It was her opportunity. Had she faltered, her name would never have come down to us as an inspiration and an example. She dared, however, to assert her right to enter at the open gate. It was her St. Bernard pass.

Standing by the open doorway, whence issued the songs of welcome and the rejoicing of many friends, stood the hesitating elder brother of the prodigal son.11 His ill temper got the better of his love of home and love of his brother. “He would not go in.”12 The ought in his soul was overridden by wrong feeling and selfishness, and blinded vision. There was the open door, there were the entreaties of his father, there were only servants outside. He would not go in. Not even to see his long-lost brother would he go. Not even to please his entreating father would he go. It was his chance. It was his great opportunity. He lost it. The record closes without any intimation that he ever regained his lost chance.

This theme has many applications. In a general way thousands miss their chance and will not go when God and Providence open wide the door for their promotion. Thousands live in a mediocre way far beneath the place God prepared them to fill. Thousands there are who failed at the schoolhouse door. Many took the lower road in the hour of temptation when the upper pathway was open to them. The revival tests souls as to which way they will go. It is the St. Bernard to millions.

Ought we not to look at open doors as providential assignments? Are they not the material readings in God’s book of the “things that are made,”13 saying evermore, “Come up higher?”14 If they are, as they seem to be, is not the failure to go in more than a mere mistake? Is it not sin? It is the Sage of Concord15 who beautifully says, “Do that which is assigned you, and you cannot hope too much or dare too much.”16

Some young person will read this with the schoolroom door open. What say you? Will you consider it one of your St. Bernard passes? Some person may read this who is now going to a religious meeting or reading a book which makes plain the open door into the Father’s house: will you go in? Some may read this who are called to make a stand for God and holiness, as Esther was called to stand for the kingdom of her God and for her people, whose souls were in the balance. Let me urge you to go into the King’s presence and make known your petition. Dying in and for the right is better than reigning as queen over one hundred and twenty provinces with the blood of souls on the queenly robes.

Reader, will you dare walk into the open doors God places in your pathway?