He gave them their request;
but sent leanness unto their souls.
— Psalm 106:15 — 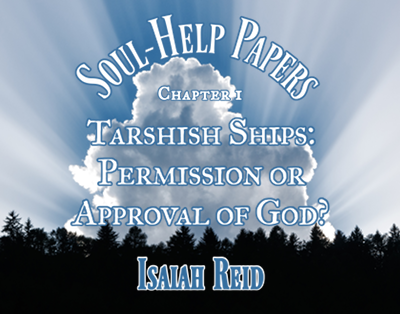 The Lord evidently permitted these uncertain, backsliding Israelites to do certain things He did not endorse. When we will go our way and will not go His way, the Lord often makes our wrath, or disobedience, to praise Him,3 by making our own way result in such defeat and disaster that it brings us to see where we are. Leanness or defeat of soul is the medicine that we find brings us to see where we are and what we are.

In the moral government of God, He respects our endowment and does not force our moral freedom.4 If we will go our way, and will hear none of His counsels, reproofs, instructions, or corrections, and will take the Jericho road, we often find a broken head by the way, and learn by terrible loss what we would not be apprised of beforehand.5 Israel sent themselves to banishment in Babylon, but learned in exile the futility of worshiping idols. The Babylonian exile cured Judah forever of the worship of idols. God would evidently have rejoiced to let them remain in their own land and serve the Lord and Him only, but they would not. So He permitted what He did not prefer. He allowed that which He did not approve. There was still another resort, a last chance. He would once more appeal to them in the hour of their sore need.

But God would not stay the results of disobedience. Natural law shall follow broken natural law with certain judgment. Spiritual famine shall follow neglected and rejected spiritual offers and opportunities. Quails to the full set forward lustful desires.6 Granted blessings are perverted and swallowed up in sensuous pleasures. The paternal estate is squandered by riotous living far away from the father’s house. When there is nothing but husks in the larder, and rags in the wardrobe, the soul begins to realize its want, and the desire comes to return to Father’s house where there is enough and to spare.7 We find out in defeat what we would not hear in our prosperity. We would not allow ourselves to be gently haltered in the open field, and had to be corralled and lassoed. The original plan for us was the first. We forced the last. We learned by defeat, because we would not listen to advice.

Poor Jonah! How he clung to that Tarshish road. “On to Nineveh,” said the Lord. “On to Tarshish,” said Jonah’s rebellious heart. “No,” said the Lord, “I have a fine city appointment in a great center of life and influence, and the people are needy.”8 But Jonah packed his grip9 and bought a ship’s passage to Tarshish. He knew God’s will. But God left him free. He could have forced him to go to Nineveh, so far as power is concerned. Jonah had his own plan. He followed his own preference. Poor Jonah! God let him eat his own bread. Jonah did not see what God saw. Jonah might have saved himself. As he saw it, there was a nice, calm sea voyage, and a good time with his friends at Tarshish. As God saw it, there was a mighty storm on the deep and men facing death in terror. There was a man being pitched out of the ship with nothing in sight but raging waves and a hungry fish and the bottom of the sea. Poor Jonah! Three days later, cold, wet, penniless and heartbroken, he gladly started for his appointment, without money or baggage, having lost much valuable time and his disobedient heart. The way God permitted, He disapproved of. But He could reach Jonah that way. Jonah would not let Him do so by the Nineveh road, and so God led him by the sea route.

A sister once prayed the Lord to grant her a certain thing which was not at all wrong, but which proved in the end not the best thing. Her heart, however, was set on it, so she asked. The Lord gave her her desire, but the result was leanness to her soul. It is usually better to inquire of the Lord His way, than to plan our own way and then ask God to bless it. God’s way is always better than our way, even if our Tarshish ship starts out in beautiful sunlight, fair skies and favoring breezes.

Another sister once came voluntarily to make a confession. She said she felt she must do it. She had carried the burden for a long time. She had committed a terrible wrong. No one knew it but herself. It was not something about which there was any question as to its being wrong. Among other things she said, “I even asked the Lord to help me in its accomplishment.” It was murder. Opportunity favored the committing of the deed. It was done. God frustrated the completion, so far as results were concerned. Then came the storm at sea, and the bitterness of the failure of the plan and the finding out the rebuke of an offended God.

Because God will not set aside our moral freedom, and because the natural order of events may seem to favor our plan, is not always sufficient evidence that our desire is in harmony with God’s will. The order of nature and the circumstantial world keeps on with open doors, forks in the road, the choice of ways, and more open doors for the accomplishment of our desires and purposes. Asking the Lord to have a ship going to Tarshish about the time you want to go, and the seeing of the ship at the pier, is not positive proof that God wants you to go there. He has ships going there for other purposes. The ship may be there only to test your obedience instead of furnishing you an opportunity to become disobedient. If you have asked God to help you steal some corn, it is no sign that He sanctions your theft because a neighbor has a big crib of corn with the door standing open. That favoring circumstance which gave you opportunity to meet a friend you had prayed you might see, is not a sure sign God wanted you to meet. It depends much upon emotions and desires. Sometimes God answers your request as the only way for you to see the “leanness” of your soul. Even Tarshish ships on a contrary sea may bring good.