The Arbiter of the Heart: Ch. 24 of “New Testament Holiness” 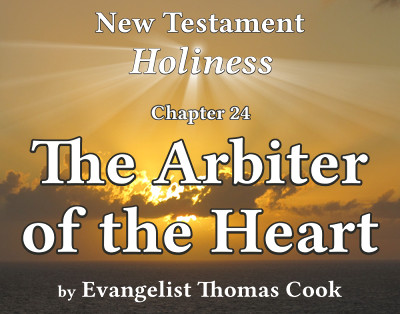 “Conscience may discern no evil,
but the peace of God
is a more delicate instrument,
dealing with questions too subtle
for conscience to answer…”2

The maintenance of a good conscience towards God from day to day is essential to the life of faith. True spirituality cannot exist unless accompanied by scrupulous conscientiousness, the purpose to do right at any cost. Archbishop Temple3 has truly said, “It is always a duty to obey conscience; it is never a duty to disobey.” Conscience requires that we mean well, and do our best. It requires not only that we follow all the light we have, but all that we can obtain, and that we do this gladly. Conscience claims regency in everything that a man should aim to do or to be. “The word ought is the sovereign of all vocabularies.”

But conscience guarantees only good intentions. Apart from knowledge and sound judgment, even those who are most conscientious may do immense mischief under the impression that they are doing the will of God. In some, conscience develops singular incongruities. Men are often very scrupulous in certain things, and very lax in other things. Frederick Robertson emphasises the fact that scrupulosity about details often slides into laxity about the eternal laws of right and wrong. The brigands of Italy would go to the confessional most obediently before starting on an adventure of robbery and murder.

The Rev. John Newton,4 the author of some of the most valuable hymns in the English language, was once, as is well known, a slave-trader on the coast of Africa. After his conversion his moral stupor was such that he saw no necessity for abandoning his diabolical trade. On his last voyage to the African coast for a cargo, he said, he “experienced sweeter and more frequent hours of Divine communion that he had ever known before.” He wrote again of his infamous occupation: “No other employment affords greater advantages for promoting the life of God in the soul, especially to one who has command of a ship.” This is the testimony of a slave-dealer. Yet the piety of John Newton at the time was scarcely less questionable than that of St. Paul. His moral sense had not been educated to see the exceptional depravity of the course he was pursuing.

The Bible itself speaks of conscience as seared, blunted, and blinded. We have Scriptural warrant for saying that the conscience may be seared as with a hot iron [1 Timothy 4:2]. In Newton’s case it was drugged, so as to give our delirious judgment. He had written several of the hymns for Christian worship which the Church sings today before he found out the depth of the moral abyss in which his moral nature was rotting. But when the awakening did come, he vaulted from the extreme of moral stupor to the extreme of moral hysteria. From the conviction that nothing was sin, his moral sense came to the conviction that everything was sin. For a time he could scarcely be persuaded to converse on other than religious topics, lest he should incur the guilt of “idle words.”

Is there any tyranny worse than that of an unenlightened conscience? Of all our ignorances and infirmities, none are more disastrous to Christian character than to fall into bondage to the ascetic scruples and tyrannical prohibitions of a conscience not healthfully instructed and mollified by good sense. It is reported that Oberlin5 once fell on his knees in a remorseful prayer, because he had despatched a letter in which he had neglected to cross the t’s and dot the i’s accurately. We may smile at his folly, but there are few Christians who cannot recall vagaries quite as foolish in their own lives, during temporary subjection to an austere conscience.

It is because of such possibilities of perversion and contortion that the human conscience is not always a safe and infallible guide. The moral sense in man is not designed to stand alone in the conduct of life and the building of character. God has provided the Christian with another arbiter to decide between good and evil, which is perfectly competent and reliable. “Let the peace of God,” says the apostle, “rule in your hearts” (Col. iii. 15). Much of the force of the expression is lost by the use of the colourless word “rule,” which is translated “arbitrate” in the margin of the Revised Version.

“It is evident,” says an eminent Biblical exegete, “that St. Paul intended something peculiar by the use of the Greek word for ‘arbitrate,’ found nowhere else in the Holy Scriptures, and styled ‘a remarkable word’ by Bengel.”6 “Wherever,” says Bishop Lightfoot,7 “there is a conflict of motives, or impulses, or reasons, the peace of God must step in and decide which is to prevail.” Dr. Maclaren8 explains that “the figure contained in the word translated rule is that of the umpire or arbitrator at the games, who, looking down on the arena, watches that the combatants strive lawfully, and adjudges the prize.”

This arbiter is not peace with God, but the peace of God, the fathomless ocean of Christ’s peace, which He has left as a legacy to His people. “My peace I give unto you” [John 14:27] It is that deep repose of spirit which we receive when we enthrone the God of peace as the Lord of our hearts and lives. When this peace becomes the paramount consideration, everything that disturbs that profound rest of the soul will be instinctively avoided, and every act that would weave the thinnest veil between us and the face of our adorable Saviour, we shall instantly shrink from. A man who is exploring an old well lowers a candle before him, knowing that where that can live, he can live. If the light goes out, he knows that it is not safe to go farther. The peace of God is the Christian’s test-flame. Anything that in the slightest degree disturbs it should be instantly discarded, otherwise the storm has begun which will wreck the fair beauty and happiness of the soul.

The question of worldly amusements has been before the court of conscience for centuries, but no final decision has been reached. Before this arbiter, which the Gospel has called to the judgment-seat of the soul, the matter is quickly settled. What we cannot do quietly we cannot do safely. Whatever mars our tranquillity or interferes with our inward repose, is detrimental to spiritual life. If we find that a given course of action tends to break our peace, we may be certain that there is poison in the draught, which, as in the old stories, has been detected by the shivered cup, and we should not drink any more. Conscience may discern no evil, but the peace of God is a more delicate instrument, dealing with questions too subtle for conscience to answer, and operating in a higher sphere.

The peace of God will approve of nothing into which Christ cannot be introduced and assigned the seat of honour. It should be to us what the barometer is to the sailor, and if it sinks, let us take warning. Whenever we find it in peril, we must retrace our steps. In all matters of doubt, when contending impulses and reasons distract, and seem to pull in opposite directions, our safety is to “let the peace of God” decide which is to prevail. Under His watchful rule the soul settles down into resolute and calm obedience to the law of Christ. The hearts and lives of men are made troubled, not by circumstances, but by themselves. We are restless because our wills are not in harmony with the will of God.

“A calm and heavenly frame”9 is only possible to those who let the peace of God have its way in their hearts. That stillness of the spirit is so sensitive, that it shrinks immediately in the presence of an evil thing. Our peace is gone immediately when we allow what it forbids. Happy are those who have enthroned the peace of God as the arbiter of their hearts! We share with Christ then, not only the peace that He gives, but “the peace which lay like a great calm on the sea, on His own deep heart.”10

The halcyon11 rest within,
Calming the storms of dread and sin.12