Christ’s Legacy to the Church: Ch. 16 of “New Testament Holiness” 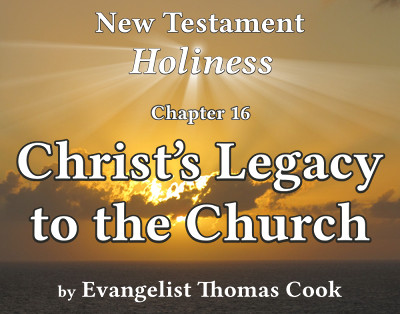 Matthew Henry says “that when Christ died He left a will, in which He bequeathed His soul to His Father, his body to Joseph of Arimathea, His clothes fell to the soldiers, His mother He gave to John, but to His disciples, who had left all for Him, He left not silver and gold, but something that was infinitely better — His peace.”3 “My peace I give unto you” [John 14:27]. Elsewhere this peace is described as the peace of God [Philippians 4:7; Colossians 3:15], because He is its source and origin. It is the peace which Christ had with the Father from the beginning, the peace in the heart of the Eternal, the stillness of eternity entering the spirit, causing a waveless, breathless calm. It lies not in the emotions, nor in the absence of the emotions. It is a peace not springing up in the course of nature, but handed down from heaven, and implanted in the believing soul.

Nothing for a moment broke the serenity of Christ’s life on earth. Tempest and tumult met Him everywhere, until outwardly His life was one of the most troubled that was ever lived. But the inner life was a sea of glass. The highest tranquility, serenity, and peace of mind were always there. It was at the very time when the bloodhounds were dogging Him in the streets of Jerusalem, that He turned to His disciples and offered them, as a last legacy, “My peace.” If the meagreness of human language fails to convey to a blind man the vastness of that ocean which lies in the hollow of the Creator’s hand, how much more is its poverty seen when it attempts to set forth, in an inexperienced soul, all that is meant by God’s perfect peace.

All Christians have peace with God, but this peace of God transcends every mind, every attempt of the strongest intellect, to realise its qualities and to describe it. Like the love of Christ, it “passeth knowledge” [Ephesians 3:19], or, as the apostle says in writing to the Philippians, it “exceeds all understanding” [Philippians 4:7]. Drummond4 describes it as “the perfect poise of the soul; the absolute adjustment of the inward man to the stress of outward things; the preparedness against every emergency; the external calm of an invulnerable faith; the repose of a heart set deep in God.”

It is the deep tranquillity of a soul resting wholly upon God, in contrast with the unrest and anxiety engendered by a self-centred and worldly spirit. Jesus called it “My peace,” in contrast with the hollowness of what the world calls peace. The world’s peace is determined by outward things, and is as changeable as external conditions. But the peace of God changes not. It is not fitful and transient, but an abiding and ever-increasing reality. Ecstatic joy fluctuates like the waves of the sea, but peace flows on without interruption, like a river ever flowing and full.

Like a river glorious
Is God’s perfect peace,
Over all victorious,
In its bright increase ;
Perfect—yet it floweth
Fuller every day;
Perfect—yet it groweth
Deeper all the way.5

It is easy to be tranquil when circumstances are favourable, and when we are high up above trouble, but the test is when we are in the midst of the waters, and when the waves thereof roar and are troubled. The peace which Christ promises never fails. Neither things present can disturb it, nor life nor death dispel it. It is abiding, and not intermittent; an unruffled under-current beneath the ground-swell of the believer’s griefs and sorrows; a peace which exists independently of circumstances secure and certain, which “the world can neither give nor take away.”

I thank God I am not afraid of any evil tidings. My heart stands calm, believing in the Lord, and desiring Him to do with me whatsoever He pleases….Thank God, I enjoy uninterrupted peace in the midst of my trials, which are sometimes not a few.

Such undisturbed repose of the soul is the promised heritage of all God’s people.

It was out of a deep experience of this very peace that Bunyan7 in his allegory8 tells us that the crowning gift of Emmanuel, when he was in possession of Mansoul, was

to ordain a new officer in the town. A goodly person he was. His name was Mr. God’s-peace. This man was set over all the notables of the city of Mansoul—my Lord Will-be-well, my Lord Mayor Understanding, Mr. Recorder Conscience, subordinate preacher Mr. Mind, and all other natives of this great and famous city.”

was not a native of the city, but came with Prince Emmanuel: he was a great acquaintance of Captain Credence and Captain Goodhope; some say they were of kin, and I am of that opinion too. This man, Mr. God’s-peace, as I have said, was made governor of the town in general, especially over the castle, and Captain Credence was to help him there. And I made great observation of it, that so long as all things went in Mansoul as this sweet-natured gentleman would, the town was in a most happy condition. Now were no jars, no chidings, no interposings, no unfaithful doings in all the town of Mansoul. Every man kept close to his own employment. The gentry, the officers, the soldiers, and all in the place, observed their order; and as for the women and children of the town, they followed their business joyfully, they would work and sing from morning till night, so that quite through the town of Mansoul now nothing was to be found but harmony, happiness, joy, and health.

Well has Bunyan pictured in these words the effect of that peace of God which “garrisons the heart and mind through Christ Jesus.” God’s-peace and Prince Emmanuel come and go together. When Emmanuel was grieved away from the city, Mr. God’s-peace laid down his commission and departed too. This peace is only known when Jesus is in full possession of the soul. Christ brings His peace with Him. “These things have I spoken unto you, that in Me ye might have peace” [John 16:33]. In Me—not through Me, out of, or from Me, but in Me. He, Himself, is our peace. Seek not the gift, but the Giver. If you receive the Giver you will insure all His gifts. Perfect peace will inevitably follow when Christ is welcomed to reign over the soul.

There is no surer sign that the keys of all the chambers of the heart have not been given up to Him than inward unrest, to be tossed to and fro, driven upon the waves of inward turmoil and trouble. This explains why so many Christians do not continually realise the peace and blessedness of which occasionally they have glimpses and enjoyment. Only at times does some wandering note from this diviner music stray into their spirits. The experience comes at few and fitful moments. When it comes, often it is a surprise, and when it goes it leaves no explanation. They wish for it to return and to abide, and ask eagerly how they may secure it permanently. There is but one answer: Perfect peace can only endure so long as Jesus reigns. Where Christ is enthroned there is always peace.

It is only when we are prepared to let Him take His rightful place as Master and Lord of our whole life, that we can realise the fulfilment of the prayer, “Now the God of peace Himself give you peace always by all means” [2 Thessalonians 3:16]. At all times, everywhere, and under all circumstances, we shall be kept in perfect peace. We shall know then, by a blessed and abiding experience, what the peace of Jesus really is, and share with Him the peace which He shared with the Father from before the foundation of the world.

Christ’s peace is thus a sort of instalment of “heaven’s perfect peace” that awaits all the children of God. Never lessening or stationary, but ever deepening and widening, it flows on year by year, and day by day, until it reaches the full blessedness of the stormless ocean of eternity.9