The Present Tense of Cleansing: Ch. 7 of “New Testament Holiness” 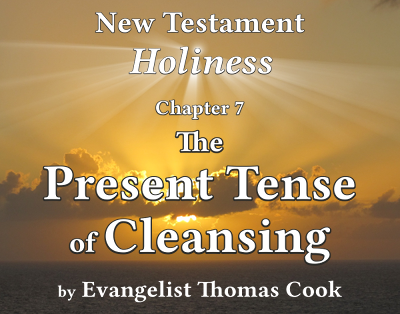 “As we obtained pardon by simple faith,
so we must obtain purity.”2

In meetings held for the promotion of holiness, we have often maintained that, so far as holiness is a deliverance from sin, the following points sum up the facts which cover the whole ground.

Most Christians assent readily enough to the first two of these propositions, but there is considerable difference of opinion as to the third, when this salvation may be obtained. Some say at death, others after a long period of growth; but we believe it may be a present and instantaneous experience. We do not mean instantaneous in the same sense as a flash of lightning or an explosion of gunpowder, but in the sense in which death is instantaneous. “A man may be a long time dying, but there is a moment when he dies.”

There is no denial that sin must be wholly destroyed in us before we can be meet for the inheritance of the saints [Colossians 1:12]. All believe that entire sanctification is necessary for admission to heaven, but not a few have discrowned Christ as the Saviour, and are waiting for death to do what they think He cannot, or will not, do. Our Bibles teach us concerning the time, the means, and the agent of sanctification, but nowhere is it taught that death is any of these. We do read that “the last enemy to be destroyed is death” [1 Corinthians 15:26], but if death brings deliverance from sin he can hardly be described as an “enemy.” If this were true, instead of being “the last enemy” he would be the last friend, and the best friend, too. What is death? It is the separation of the soul from the body. But the mere separation of the soul from the body will not destroy sin in the soul, and only the soul can be the seat of sin.

It is to be feared that those who have no expectation of deliverance from sin until death comes to the help of Jesus, have got hold of a relic of Gnosticism—a heresy which was early introduced into Christianity as a corrupting element. The Gnostics taught that in all matter was evil—ineradicable evil. Because our bodies are composed of matter, they believed there was evil in the body; and because the spirit dwells in such a body, it is tainted, and must be till this “mortal puts on immortality” [1 Corinthians 15:53,54]. But the idea of sin in the body is totally unscriptural, as it is palpably absurd. No body, or matter of any kind, can be sinful; spirits alone are capable of sin. To teach that our spirits will be cleansed from sin after death is to accept the Papal doctrine of purgatory. The soul must be purified, therefore, either in the moment of death or before; and we have already shown that the mere separation of the soul from the body will not effect this change. When, then, will this cleansing take place? Before death, necessarily. And if it is Christ who saves from sin, why not now? With Him there is no such thing as time. Centuries, years, months, weeks, days, are nothing to God. “One day is with the Lord as a thousand years, and a thousand years as one day” [2 Peter 3:8]. If we have fulfilled the conditions, God is as able and willing to save from all sin now, as He will be a moment before death.

As we obtained pardon by simple faith, so we must obtain purity. We are no more able to work out the latter in our hearts than the former. Sin is not a thing to be grown out of, but something to be cleansed away. “Every branch in Me that beareth fruit He purgeth it” [John 15:2]. The branch that is covered with blight does not grow out of the blight. The branch that has too much wood, and needs pruning, does not secure the pruning by growth. It is pruned in order that the hindering thing may be removed and growth promoted. Purity is something removed; growth is something added. Growth in grace is a natural process, the enlargement or development of some living force; holiness is the gift of God, a supernatural work wrought in the soul by the Holy Ghost. The soul can no more grow pure than the growth of a plant can kill or destroy the worm at its root. Purity and growth are as distinct in their offices as the work of two men on a building—one is removing the rubbish, the other is enlarging and beautifying the structure. In growth we are active and cooperative, but in entire cleansing the soul is passive it is something experienced, the same as regeneration. It is a special miracle of grace—the power of God invoked by faith, for this particular end, and consequently instantaneously received.

But holiness is not some immutable state which we attain by a desperate venture of faith once for all; it is rather a condition of soul which requires for its maintenance the continual observance of the conditions by which we enter into it.

“Do you teach the possibility of an absolute death of sin?” asked an undergraduate during a mission which I held in Oxford some years ago.

“No,” was my reply, “we teach the possibility of a conditional death of sin.”

“What is the difference, may I ask, between a conditional death of sin and an absolute death?” he further inquired.

My answer was as follows:— “Suppose there were no windows in this building and it were full of darkness; how are we to get rid of the darkness? A strong light is brought in, and when the light fills the building, the darkness is excluded. But the darkness is only excluded so long as the light remains. If we remove the light, the darkness returns. Let the darkness represent sin, and the light holiness. What the light is to the dark room the Holy Spirit is to the heart of the believer. When He fills the heart with the light of His own indwelling presence, all sin is excluded, but that condition is only maintained so long as the Holy Spirit continues fully to possess the heart. By one act the room becomes instantly lighted, but if it be continued in a state of illumination, the presence of the light must be continued. So to retain the Holy Spirit’s presence within us, and the purity which the radiating power of His own most blessed presence produces, requires a continual walking in the light, and the continual acting of the same faith by which we first received it.”

Holiness is both a crisis and a process. As Bishop Moule3 would say, “It is a crisis with a view to a process.” A crisis is undoubtedly reached, when after full surrender of all we have, and are, to the Lord Jesus, we venture out upon the promise with an appropriating act, “the blood of Jesus Christ His Son cleanseth ‘me, even me,’ from all sin” [1 John 1:7].4 When we believe this, the Holy Spirit comes to our hearts in sanctifying power, excluding all the evil, and filling us with Divine love, just as He came to our hearts in regenerating power when we believed for forgiveness and were adopted into the family of God. The heart is only cleansed from all sin by the Holy Spirit taking full possession of it, and it is only kept clean by His remaining in full possession. We teach, therefore, not a state of purity, but a maintained condition of purity, a moment by moment salvation consequent upon a moment by moment obedience and trust. “The blood of Jesus Christ cleanseth us from all sin” all the time by cleansing us every now.

Blessed word “cleanseth”—present progressive tense—it goes on cleansing. Does it not teach, as Miss Havergal5 puts it, “a continual present, always a present tense, not a present which the next moment becomes a past, not a coming to be cleansed in the fountain only, but a remaining in the fountain”?6 It means ever-present provision for ever-present need; Christ is always a present Saviour.  We are kept clean like the eyes of the miner who is working all day amid the flying coal-dust. When he emerges into daylight his face is grimy enough, but his eyes are clear and lustrous, because the fountain of tears in the lachrymal7 gland is ever pouring its gentle tides over the eyes, cleansing away each speck of dust as it alights. Our spirits need a similar cleansing, and this is what our blessed Lord does for us, as we believe moment by moment “that the blood cleanseth.”

The habit of faith must be acquired. Faith in the spiritual world has been compared to breathing in the physical. We breathe this moment and receive the oxygen into our lungs, it purifies the blood which goes coursing through the system, carrying life and nutriment to all the tissues; but when another moment comes, we must breathe again, another moment again, and so on. Life is made up of successive acts of breathing. We breathe moment by moment, and live moment by moment.  If we cease to breathe we cease to live. In like manner we trust the blood of Jesus for cleansing this moment, and it cleanseth from all sin; another moment comes, and we trust again, and another moment yet again, and so on. We are thus kept clean exactly as we are made clean, through a constant succession of acts of faith in the cleansing blood. But this habit of faith requires time to establish. Every habit grows out of a succession of little acts. The faith that cleanses our hearts from sin requires a definite effort at first, but repeated moment by moment, it becomes spontaneous, and by and by natural as breathing. The habit becomes a necessity and easier as it grows.

But only as we walk in the light does the blood of Jesus cleanse from all sin. Should there be a moment’s hesitation about yielding, obeying, or trusting, communion with God will be broken, and darkness and sin will return. We must not only maintain a perpetual attitude of self-surrender and abandonment to the will of God, but our consecration must keep pace with the ever-widening circle of illumination. Most believers over whom Satan gets an advantage are either disobedient to one of God’s written commands, or to the inward promptings of the Holy Spirit. The blood, however, never loses its virtue, and whenever, in our walk in the light, we are sensible of the least soil of evil, we may wash again and be clean.

As already explained, holiness expresses that state of soundness in the spiritual part of man which corresponds to health in the physical part of man; but our souls, like our bodies, are liable to disease, though at present, they may be in perfect health. Just as to maintain bodily health we must observe the laws of health, so to maintain spiritual health, we must moment by moment trust and obey.