by Jim Kerwin on October 22, 2015
This entry is part 8 of 28 in the series New Testament Holiness 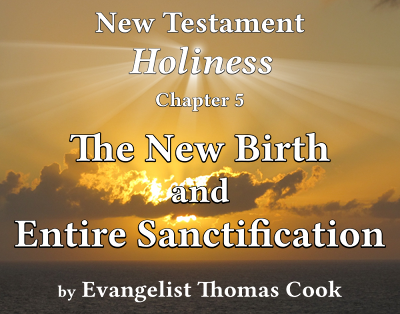 “…the exact difference between regeneration and entire sanctification…is this: the one has remaining impurity; the other has none.”2

Divine forgiveness and the new birth are ever co-existent and inseparable. No man receives the new name of a child of God without at the same time receiving a new nature. He becomes there and then a partaker of the Divine holiness. Condemnation is removed, the culprit is forgiven, and as invariably as day follows night, a sublime change is wrought by the Holy Spirit, creating within the soul a new spiritual life, a life of loyalty and love.

The Scriptures describe this work of the Holy Spirit as a new creation, a being “born again” [John 3:3, 7; 1 Peter 1:23]; “born of the Spirit” [John 3:5,6,8]; a passing “from death unto life” [John 5:24; 1 John 3:14]; “quickened with Christ” [Ephesians 2:5; Colossians 2:13], and by many like expressions all indicating newness and sanctity.3 It is such a renewal of the soul as turns the preponderating tendencies towards God; the love of sin is destroyed, the power of sin is broken, and a desire and relish for holiness is begotten.

In a measure and to a certain extent the Christian is sanctified when he is regenerated. He is set apart for God. He is made a new creature in Christ Jesus [2 Corinthians 5:17]. A new and heavenly life is breathed into him by the Holy Spirit. He is translated out of darkness into marvelous light [1 Peter 2:9]. The dominion of sin is broken. The love of God is shed abroad in his heart [Romans 5:5], which is the incentive to obedience, and the germ of holiness. His desires, tastes, impulses, aims, and aspirations are all changed. He no longer “lives unto himself” [Romans 14:7]; “his life is hid with Christ in God” [Colossians 3:3]. He has victory over the world and sin, enjoys inward peace, walks before God in newness of life, and, loving God, keeps His commandments.

Regeneration is holiness begun. Whatever is of the essence of holiness is found in germ in all who are children of God. But though all the elements of holiness are imparted, the work of inward renewal is only begun, not finished, by regeneration. On this point there is harmony of faith among all the Churches. They hold that regeneration does not free the soul from depravity. It introduces a power which checks the outbreaking of depravity into actual sin, but inward corruption remains, manifesting itself in a bias towards evil, in inclinations to sin, in a proneness to depart from God, “a bent to sinning.” Says Bishop Foster:4

Sin committed, and depravity felt, are very different; the one is an action, the other a state of the affections. The regenerate believer is saved from the one, and he has grace to enable him to have victory over the other; but the disposition itself to some extent remains, under the control of a stronger gracious power implanted, but still making resistance, and indicating actual presence, and needing to be entirely sanctified.

It is by no means uncommon for persons to imagine at the time of forgiveness that depravity is completely destroyed.  The change is so great, even as “from death unto life,” that the work of moral renovation seems perfect.  The love and gladness of the newborn soul is so overflowing, as for a time to create the impression that the heart is entirely cleansed.

When this occurs the new convert is often surprised and alarmed, and sometimes deems his conversion a failure, not knowing the Scriptures or the two-fold nature of sin.

between a regenerate state, and a state of entire and perfect holiness, will be generally allowed.  Regeneration, as we have seen, is concomitant7 with justification, but the apostles, in addressing a body of believers in the Churches to whom they wrote their Epistles, set before them, both in the prayers they offer on their behalf, and in the exhortations they administer, a still higher degree of deliverance from sin, as well as a higher growth in Christian virtues. Two passages only need to be quoted to prove this:—

In both these passages deliverance from sin is the subject spoken of; the prayer in the one instance, and the exhortation in the other, goes to the extent of the entire sanctification of the ‘soul’ and ‘spirit,’ as well as of the ‘flesh’ or ‘body,’ from all sin; by which can only be meant our complete deliverance from all spiritual pollution, all inward deprivation of the heart, as well as that which, expressing itself outwardly by the indulgence of the senses, is called filthiness of the flesh and spirit.”

In regeneration, sin is subdued and conquered, but it is not destroyed. The fortress of Mansoul8 has been won for its legitimate Lord, but within its garrison some traitors lurk, maimed and bleeding, but not dead. The disease is modified, but it is not eradicated. The bitter and baneful9 thing is nipped in the bud, some of the branches are lopped off, but the root is not removed. Depravity is suspended, held in check, repressed; but it is not fully expelled from the soul. It does not reign, but it exists. Tendencies to sin are controlled, but they are not extirpate.10 There is still a warfare within, a sort of duality, in which flesh and spirit antagonise each other. It is a state of mixedness, in which Christians in a degree, according to the measure of their faith, are spiritual, yet in a degree they are carnal. We would not for a moment minify11 the great and glorious work of conversion, but all experience testifies that an “infection of nature does remain, warring against the Spirit even in those who are regenerate.” The result often is that from the germ-sins in the heart spring actual sins in the life.

Regeneration is the beginning of purification. Entire sanctification is the finishing of that work. Entire sanctification removes from the soul all the elements which antagonise the elements of holiness planted in regeneration. It is an elimination, as dross12 is separated from the gold by fire. It is an eradication, the removal of all roots of bitterness, the seeds of sin's disease. It is a crucifixion, the putting to death of the body or the life of sin. It is such a complete renewal of the heart that sin has no longer any place within, its last remains are scattered, the war within the citadel ceases, and God reigns without a rival.

There are those who teach that entire sanctification consists in the power of the Holy Spirit repressing13 inbred sin, holding in check our sinful proclivity,14 choking down the old man instead of putting him to death. When the apostle speaks of the body of sin being destroyed (Rom. vi. 6), they tone down the meaning of the word destroyed,15 and explain it as meaning to render inert or inoperative; but Dr. Steele16 with his critical research points out the strength of the word by comparing it with the following texts where the same word is rendered “abolish,” “consume,” or “destroy”: 2 Corinthians iii. 13, Ephesians ii. 15, 2 Timothy i. 10, I Corinthians vi. 13, I Corinthians xv. 26, 2 Thessalonians ii. 8, Hebrews ii. 14. We have no fear of the result of a careful investigation of these texts by unprejudiced and candid minds.

The same writer also calls attention to the fact, that while the Greek language abounds in words signifying repression, a half-score of which occur in the New Testament, and are translated by to bind, bruise, cast down, bring into bondage, repress, hinder, restrain, subdue, take by the throat, yet none of these is ever used of inbred sin, but such verbs as signify to cleanse, to purify, to mortify or kill, to crucify, and to destroy. “We have diligently sought,” he says,

in both the Old Testament and the New for exhortations to seek the repression of sin. The uniform command is to put away sin, to purify the heart, to purge out the old leaven, to seek to be sanctified throughout spirit, soul, and body. Repressive power is nowhere ascribed to the blood of Christ, but rather purifying efficacy. Now if these verbs, which signify to cleanse, wash, crucify, mortify, or make dead, and to destroy, are all used in a metaphorical sense, it is evident that the literal truth signified is something far stronger than repression. It is eradication, extinction of being, destruction.17

Here is surely sufficient warrant for the prayer:

Every deed and thought unruly
Do to death; for He has died.18

This teaching is confirmed also by the prayer, already referred to, which St. Paul offered for the Thessalonians, “And the very God of peace sanctify you wholly” [1 Thessalonians 5:23]. The word “sanctify” has two principle meanings:

In the prayer before us the word is used in the latter sense, and to denote the thoroughness and pervasive nature of the purification prayed for, the apostle uses a strong word which is found nowhere else in the New Testament. Commentators agree that the word translated “wholly”19 is one of the strongest words that could possibly be used to express complete deliverance from spiritual pollution. Dr. Mahan20 says it is compounded of two words, one meaning all, the other perfection. Dr. Adam Clarke21 says the original word signifies precisely the same as our English phrase “to all intents and purposes.” Luther translates it “through and through.” In the Vulgate22 it is rendered “in your collective powers and parts.” Mr. Wesley says it means “every part of you perfectly.” If full deliverance from sin is not taught in this prayer, it is not within the power of human language to teach it. Thrice welcome the assurance that follows the prayer: “Faithful is He that calleth you, who also will do it” [1 Thessalonians 5:24].

The difference between the two experiences has been well illustrated as follows: In the coal regions of the Wyoming Valley, in America, there are two principal seams of coal. In the first and upper seam there is a great preponderance24 of coal, but there are small seams of slate running through the coal. The lower seam of coal is much thicker than the upper seam, and it is all pure, solid coal, without any slate. The upper seam resembles the regenerate heart in which there is a preponderance of grace, but there are also remains of the carnal mind, the rudiment25 of sin. The lower seam is like the believer’s heart after entire sanctification has completed the work of purification; the pure love of God reigns alone without its opposites in any degree. There the graces of the Spirit exist in the soul without alloy,26 without mixture, in simplicity. There is nothing contrary to them, and they exist in measure corresponding with the present capacity of the soul possessing them. Every buyer and seller is then excluded from the temple.27 No Canaanite remains in the land.28 We are “delivered out of the hand of our enemies,” that we may “serve God without fear in holiness and righteousness before Him all the days of our life” [Luke 1:74,75]. The soul then enters upon the Sabbath rest of the love of God, and is filled with perfect peace.