by Jim Kerwin on October 22, 2015
This entry is part 7 of 28 in the series New Testament Holiness 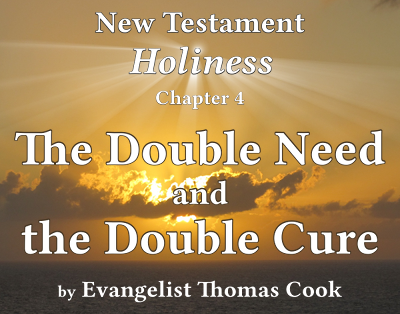 “God graciously tempers His revelations
of our need to our weakness.”2

The reason why many do not apprehend the true nature of the salvation of Jesus Christ is because they do not understand the true nature of sin. Defective views of sin lead to incorrect views of privilege. What we think of the Atonement depends greatly upon our view of the evil which made it necessary.

Without the fullest information about sin, no man can have the fullest information about himself; or, what is still more important, without understanding sin, no man can ever understand God and His dealings with us. The man who has felt his guilt most deeply always appreciates most the value of Christ’s redeeming work. Sin has many aspects, but there are two primary forms in which it exists. We can form no adequate conception of its nature, nor of the remedy God has provided, unless we look at it from these two points of view. We must discriminate between guilt and depravity.

Sin is wrong-doing, but a state of sinfulness existed before we began to do. Wrong-doing involves guilt, and needs forgiveness, but a state of sinfulness cannot be forgiven. Pardon refers to actions, but a sinful condition is not action. Sin in the sense of guilt is a voluntary violation of the Divine law, an actual transgression in thought, word, or deed; but depravity is an involuntary state of the heart which we have inherited from our first parents in the fall, hence it is often described as inbred or inborn sin. Depravity is not actual sin, it is the inward fountain from which actual sin originates; that inward cause of which sins are the effect. It is deeper down and farther back in our nature than wrong-doing. It is sin in embryo—that state of the heart out of which acts of sin are born.

“A man is not a sinner,” says a late writer, “because he does evil; he does evil because he is a sinner. Train him as you will, evil will come out of him if it is in him.” Behind the doing of sin is the being of sin, and it is only by removing the cause that the effect will cease. The whole tenor of Scripture teaches that the purpose of the death of Christ was not merely to save men from the consequences of sin, but to save them from sin itself—the sin which causes the sins. It is the being, or “body of sin,” as St. Paul terms it, that is to be “crucified” and “destroyed,” in order that “henceforth we may not serve sin” (Rom. vi. 6). The Divine method is not to lop off a branch here or cut away an excrescence3 there, but to strike at the root.

We have read of a man who said he had cured his boy of pilfering, and on being asked how he had done it, he said he had tied his hands behind his back. It need scarcely be said that this is not the way in which God works. Hands do not steal, there is something behind the hands. Some will say there is the will, but our nature is behind our will, and it is there where we need to be put right. Better than his creed a man may be, but no man is better than his heart. The heart in the word of God stands for condition, as distinguished from conduct. A man will do according to what he is. The heart is the spring from which issue the streams that make up the sum total of a human life. If the fountain be kept pure, all the streams will be pure. When the heart is right, the outward life will correspond as naturally as fruit to a tree. Hence the exhortation, “Keep thy heart with all diligence, for out of it are the issues of life” [Proverbs 4:23].

Does not the high import of the Sermon on the Mount [Matthew 5-7] consist in the fact that a moral condition is demanded antecedent to4 the act? Not only is the external observance of the ten commandments required, but the secret desires of the heart must be pure. Most persons have never committed the sin of murder as an act, i.e., they have never lifted their hand to strike the fatal blow; but St. John teaches, “He that hateth his brother is a murderer” [1 John 3:15]; that those who cherish feelings of malice or desires for revenge are as certainly guilty as those who have committed the deed. The law is as surely broken by the man who would sin if he dared, as in the case of him whose state of heart finds expression in outward acts.

Depravity as such is not always seen in the outer life, but it is manifest to the painful consciousness of the believer. When he would do good, evil is present with him [Romans 7:21]. The strong man is bound, but not being cast out, he makes desperate efforts to burst his bonds and reassert his supremacy in the household. The evil within may be kept in subjection, but the struggle is often so severe and protracted that ever and anon the bitter cry is extorted, “Oh wretched man that I am, who shall deliver me from the body of this death?” [Romans 7:24]

The penitent convicted of his sins seeks Divine forgiveness. The believer convicted of the depravity of his nature sighs for inward purity. The one inquires, How can the sins which are past be forgiven? The other asks, How can I be cleansed from conscious impurity? We are guilty for what we have done, but we were depraved before we were responsible for our doing. The existence of both original and actual sin has always been accepted by the Christian Church as a Scriptural doctrine.

It is because sin exists in this twofold character, as an act and as a state, that salvation assumes a twofold aspect, or is applied in two forms. For guilt there is forgiveness, for depravity there is cleansing. Forgiveness is complete forgiveness, but forgiveness can only extend to actual transgression. A mother puts upon her child a clean pinafore,5 and says, “Now, this must not be soiled.” But the child disobeys. The mother may forgive the child for her disobedience, but she cannot forgive the pinafore clean; she must wash it. So God may forgive the wrong we do, but He cannot forgive a depraved heart. Depravity is removed by purgation6 or cleansing. This is in perfect harmony with the Scriptures. Zechariah represents the fountain of Atonement as opened to meet this double need—pardon for sin (guilt), and purity for uncleanness (depravity) [Zechariah 13:1]. St. John’s teaching is exactly the same. “If we confess our sins, God is faithful and just to forgive us our sins (guilt), and to cleanse us from all unrighteousness (depravity)” [1 John 1:9]. And with this view the hymn is in exact accord—

Let the water and the blood,
From Thy wounded side which flowed,
Be of sin the double cure,
Save from wrath, and make me pure.7

This twofold provision for the two forms in which sin exists runs all through the Scriptures. It was typified in the history of God’s ancient Israel when they crossed the Red Sea and the Jordan in leaving Egypt and entering Canaan. We enter into the holy place by regeneration, but let us not forget that, after the second veil is the tabernacle which is called the “Holy of Holies” (Heb. ix. 3).

We do not deny that in some instances Divine forgiveness and complete inward cleansing may have been experienced at one and the same moment, but certainly that is not the usual order in which God works. Both Mr. Wesley and Dr. Adam Clarke8 inform us that they never met with a single instance when God both pardoned guilt and purified the heart at the same time. The explanation is that God’s work is always in harmony with man’s faith. The work wrought and the blessing obtained are in accordance with the faith exercised. God bestows what the soul’s intelligence perceives to be its need, and what faith humbly claims.

The faith of the sinner seeking forgiveness is limited by the view his intelligence takes of his necessity. His all-pervading desire is to be pardoned. He is guilty, and must be forgiven. Every other thought is swallowed up in the sense he has of his need of Divine mercy. His prayer is, “God, be merciful to me, a sinner” [Luke 18:13]. It is this prayer God hears and answers. All his sins are forgiven, fully forgiven for Christ’s sake.  He receives according to his faith.

But as yet he knows little of the deep depravity of his heart. God graciously tempers His revelations of our need to our weakness. In like manner, He did not lead the children of Israel by the shortest route into Canaan; He led them by a round-about way, lest they should despair in view of the difficulties [Exodus 13:17]. It would paralyse the faith and extinguish the hope of many if they had revealed to them their inward corruption when they first see and feel their guilt and danger. Not until the soul can bear the revelation does the Spirit of God reveal “the depths of inbred sin.” There is a conviction of our need of cleansing analogous to the conviction of guilt and danger which precedes our pardon and renewal. A painful sense of need is wrought when the Holy Spirit discovers to us the plague of our hearts, the abominations which lurk and fester within the chambers of our souls. Under His all-searching and piercing gaze, the sense of sin within becomes deeper and more poignant, until, deeply humbled, we bewail our condition, and cry with the Psalmist, “Create in me a clean heart, O God, and renew a right spirit within me” [Psalm 51:10]. It is then, when our intelligence apprehends the soul’s deep need of inward purity, that definite prayer is offered, definite faith is exercised, and God speaks the second time, “Be clean.”

To those who deny that there is any such second great work of grace, or crisis, which marks a distinct epoch in the Christian life, we would commend the words of Dr. W. B. Pope,9 late of Didsbury College, Manchester.  Speaking at a meeting for the deepening of spiritual life, he said:

I have sometimes very delicately scrupled at this, that, and the other expression, and I have wondered whether it is right to speak of a “second blessing;” and I have taken a text [Mark 8:22-25] in which our Saviour takes a blind man and partially restores his sight; and then, holding the man up before us for a little while, that we may study this state, which is a great advance upon what it was, that we may watch him in his state of struggle between sin and the flesh, He touches him again, and he sees every man clearly. In the face of that text, and in the face of the experience of multitudes of our fathers, and in the face of the testimonies of multitudes now living, and in the face of the deep instinct, the hope and desire of my own unworthy heart, I will never again write against the phraseology referred to.