by Jim Kerwin on October 22, 2015
This entry is part 5 of 28 in the series New Testament Holiness 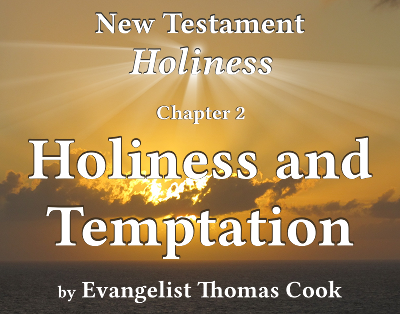 “…childlike purpose, a sincere aim in all we do to please God.”2

It is a mistake to suppose that there is any state of grace this side of heaven which puts a Christian where he is exempt from temptation. So long as a soul is on probation, it will be tested by solicitations to sin.

It is true, when the heart is cleansed from all evil, the warfare within ceases. The struggle with the flesh, or inbred sin, or depravity, by whatever name it may be called, comes to an end when all antagonisms to God are expelled from the soul, and Christ reigns without a rival. But there are other enemies than those which exist within, against whom we shall have to fight strenuously to the end. “We wrestle not against flesh and blood, but against principalities, against powers, against the rulers of the darkness of this world, against spiritual wickedness (wicked spirits) in high places” [Ephesians 6:12]. This implies temptation, but temptation cannot be inconsistent with holiness, because Jesus was “in all points tempted like as we are, yet without sin” [Hebrews 4:15].

The Christian life is a long battle, but that fact does not imply that we are sinful, or inclined to sin. The nearer we live to God, the thicker and faster will Satan’s arrows fly. Some Christians do not live near enough to God to be the subject of a downright spiritual struggle. There is no better evidence of grace and progress than that we are much harassed by Satan’s emissaries. He does not need to employ his forces against nominal and inconsistent professors of religion. Severe temptation often precedes, or follows, special and signal blessing. Christ’s great battle with Apollyon3 occurred immediately after the descent of the Holy Ghost at His Baptism. As soon as He had received the signal anointing, which was to prepare Him for His great mission, “then was Jesus led up of the Spirit into the wilderness to be tempted of the devil” [Matthew 4:1]. His temptation was evidently a part of the Divine plan, not only permitted, but arranged for. Experience was gained in His conflict with Satan, which could not have been obtained in any other way. Having “suffered being tempted,” [Hebrews 2:18] He is now able to succour those who are tempted as would have been impossible had He not resisted Satan’s fiery darts Himself.

Temptations are permitted for a purpose. None can come without Divine permission. Did not Satan complain that God had set a hedge about Job which he could not pass without a special permit [Job 1:10]? The Indians say that when a man kills a foe, the strength of the slain enemy passes into the victor’s arm. In that weird fancy lies a great truth. Each defeat leaves us weaker for the next battle, but each conquest leaves us stronger.

“Did Jesus Christ know that Judas was a thief?” [John 12:4-6] was a question asked at one of our recent holiness meetings. The reply was in the affirmative. “Then why did the Master, if He knew that, give him the bag?” continued the interrogator. The reply was as follows: God allows the bag to be put in every life—by “the bag” is meant that which is constantly testing our loyalty to Him—and usually the temptation comes in the weakest place of our character. God permits this because He knows we can only gain strength in the weak place by overcoming temptation at that point. Each new triumph brings an increase of moral power, and makes victory the next time easier. This is probably the reason why Bunyan4 places nearly all the great combats which Christian fought with Satan early in his journey. The first years of Christian life are the formative period of Christian character, when the assaults of the tempter are fullest of possibilities of benefit to the believer.

Samuel Rutherford5 writes: “The devil is but a whetstone to sharpen the faith and patience of the saints.  I know that he but heweth and polisheth stones all the time for the New Jerusalem.”

Some sincere souls are in constant bondage because they have never been taught to discriminate between evil thoughts and thoughts about evil. We must discern between things that differ. So long as we are in this world, and so long as we have five senses coming in contact with a world abounding with evil, Satan will be sure to use these as avenues of temptation. But no taint comes on the spirit from temptation which is at once and utterly rejected. It may and should be instantly repelled.

Evil into the mind of God or man
May come and go, so unapproved, and leave
No spot or blame behind.7

It may seem difficult to some to ascertain whether certain states of the mind are the result of temptation, or the uprisings of the evil of their own nature. But when suggestions of evil awaken no response and kindle no desire, when they cause a shudder and a recoil, when they are opposed to our usual inclinations and desires, and cause pain, we may safely conclude that they are from without and not from within, and no self-reproach need ensue.

An evil thought springs from evil existing in the heart, but a thought about evil is a suggestion, flashed upon the mind by what we see or hear, or by the law of association, or by the enemy of our souls. Those who are holy have no evil within, consequently no evil thoughts; but intruding thoughts and whispers of evil will often need to be resisted. These are an unchangeable condition of probation.  Provided proper caution has been used to avoid occasions of temptation, “no spot or blame” [2 Peter 3:14] is left behind, any more than the shadow of a cloud passing over a beautiful lake disturbs or defiles it. It is not temptation, but the yielding to it that is sinful, and there is a condition in which we may, with St. Paul, always triumph [2 Corinthians 2:14].

Temptation is first presented to the intellect, flashed it may be in a moment, the thoughts are appealed to—this is the earliest stage of temptation. Thence it is transmitted to the sensibilities, in which region it operates upon the senses, appetites, passions, or emotions. There is danger lest these be excited with a desire for gratification. A critical stage of temptation is now reached, but no guilt is necessarily contracted. In the case of those whose hearts are not entirely cleansed from sin, the temptation finds more or less inward sympathy, but there is no guilt incurred unless the evil suggestion is cherished or tolerated. The will has yet to be challenged, and upon its decision depends entirely whether the tempter is to be successful or not. If the will says “No” to the temptation, the tempter is foiled and defeated, and the soul comes off more than conqueror.

Though it is possible for the fully-cleansed soul to listen to Satan, and to reason with him until he again ejects sin into the heart as of old—he “beguiled Eve by his subtlety” [2 Corinthians 11:3], whose heart was perfectly pure—still it is not so likely that he will be successful as before the heart was cleansed from sin. There is no porter Parley8 within the citadel then, to open the castle gates to the enemy who is without. Holiness makes none so secure as that they cannot sin, but it gives them to possess all the elements of strength and stability. Though the warfare be long and severe, yet, by abiding in Christ, victory may be constant and complete; and as storms help to root the trees, we shall find that the best helps to growth in grace are the affronts, the crosses, and the temptations which befall us.