An Overview of the Life of Rev. Isaiah Reid 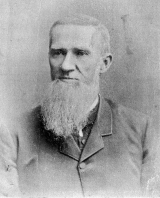 One of Isaiah Reid’s contemporaries called him an “Abraham of the holiness movement.” Detailing Reid’s life and ministry has been a passion of mine for the last several years, and considering how difficult it has been to “fit” that life into a 300-page master’s thesis and a biography that has grown much larger than the thesis, I assure the reader that the brief overview presented here is but a tip of the “tip of the iceberg.”

Perhaps the easiest approach would be to present a brief outline of his life, with short comments as applicable.