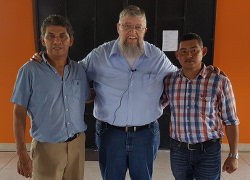 Thanks for praying! I’m back from almost two weeks in Honduras and the “prayer umbrella” was apparent every day — divine appointments, new friendships, unction in teaching, excellent translators, safety, perfect health, and lots of energy. Even two “almost missed” flight connections were just that — only “almost.” But the greatest success of the trip may be measured within a year’s time by the number of “elephants” eaten. Let me explain.

When I visit these Latin American countries, the initial invitations center around teaching hermeneutics, a fancy word that can be boiled down to this: learning how to read, study, preach, and teach the Scriptures in context. We spend time in the first seminar defining and demonstrating many aspects of context — text, history, language, culture. But my overriding goal is to have the pastors and leaders remember two things: 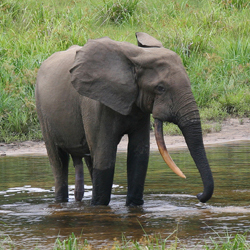 An elephant in an African “context”

To illustrate what happens when we pull something out of context, I use John Godfrey Saxe’s poem The Blind Men and the Elephant, a delightful bit of verse in which each of six blind men encounter one aspect of the elephant’s body (e.g., leg, tail, trunk, ear, tusk, and side) and jump to a wild conclusion about what the entire elephant must look like. Drawing from that analogy, and not wishing to be like the blind men, we establish that the only way to see the “whole elephant” is to read the whole Bible, and to commit to reading it on a regular basis.

Elephant on the Menu — Daily!

That brings up the next question in the seminar: How do you eat an entire elephant? Answer: One bite a a time. Not a few in my audience have a very limited education, and reading doesn’t come easily for them. So “one bite at a time” — that is, a few chapters a day — is the solution. What seems at first like a daunting task — reading the Bible cover to cover — comes into focus as a matter of loving self-discipline and commitment.

I warn people the first day of the two-day conference that I will be offering a closing-session read-the-Bible-annually challenge to all the leaders present the next day. I ask them to pray and count the cost. And quite the opposite of making an “emotional appeal” to sway them, I actively caution them against taking the plunge lightly, commending those who don’t make the commitment for their honest counting of the cost. Nevertheless…

At the end of the first seminar, while we were assembling for the photo you see above, I jokingly said to the group, “Picture the newspaper headline a year from today: 27 ELEPHANTS MISSING, PRESUMED EATEN!” They got the “inside joke.” That went over so well that I presented a similar year-from-today headline to the second group: 54 ELEPHANTS MISSING, PRESUMED EATEN.” If my math isn’t too rusty, 27 + 54 is still 81; hence the title of the newsletter — Eating 81 Elephants.

Yes, I’m aware that elephants are endangered species, and I don’t want to make light of that fact, because part of our Genesis 1 Dominion Mandate from God means that we’re to be good and wise caretakers of the Creation of which He has made us stewards. Nevertheless, nearly 50 years of observation as a Christian tells me that a far more “endangered species” on the planet are Christian believers — especially leaders — who read the Scriptures cover to cover on a regular basis. That is to say, I’m not nearly as concerned about the survival of elephants as I am about the survival of “elephant eating” Bible readers. 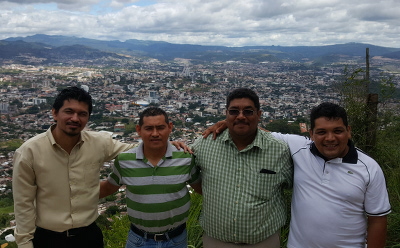 Alas, I can’t do much to save that endangered species in the USA. But God has blessed me by opening up doors of opportunity — in Guatemala, Costa Rica, Nicaragua, Perú, Czech Republic, and now Honduras! — to instill this vision and hunger in leaders. I shared this first in 2008 in Guatemala, where the pastors and leaders picked up the challenge and — wow! — what fruit God has harvested from their faithfulness! Twice in the last year (Perú and Honduras, where the Guatemalans now also teach basic Bible doctrine regularly), when I broached this subject, what I heard was, “Oh, yes, the guatemaltecos have been telling us that!” In fact (if you’ll allow me a non-elephantine baseball analogy), I think what happened in Honduras this month was a result of the Guatemalans “loading the bases” with their “encourgency” (encouraging urgency — you read it here first!) to “read the Bible cover to cover every year.”

Hanging out with more elephant eaters, pastors from the “departamento” (state) of Paraiso (with Javier and Angel center) in Valle de Angeles 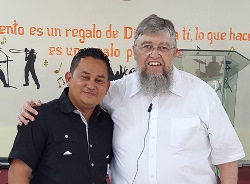 Yes, the guatemaltecos loaded the bases, preparing Honduran hearts; the hondureños digested the hermeneutics teaching with anticipation; and what might have been only a solo home run turned into a spectacular grand slam! In no other place have I seen this sort of overwhelming first-time response: “Yes, Lord, I will read the Scriptures faithfully, completely, annually!” The Guatemalans planted and the firstfruits were plentiful!

Now we await a full harvest. Please pray for the Eighty-one “Elephant Eaters” in Honduras, that they will grow in the spiritual discipline of daily, systematic, purposeful Bible reading; and that God will bless their faithfulness and open the Scriptures to them, making them better preachers and teachers and spouses and parents and Bible interpreters along the way. If the Guatemalans faithfully planted this way, would you please take on the prayer-task of “watering”? If you do, we could have a full-on 1­ Corinthians 3:6 on our hands — one plants, another waters, but God gives the increase.

And please pray for Denise and me as well, that God would provide for our needs and our upcoming trip to Perú (late October through early November). We can’t wait to get back there to see what has become of the “elephant eating” peruanos down there!