Answered Prayer for the Honduras Trip! 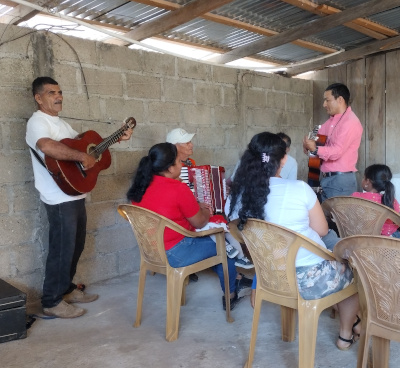 Consider this communique a praise report! While you were praying for last month’s Honduras trip, God was answering and blessing. Maybe it’s just because I’ve been Covid-restricted in my travel for two years, but it really seems like this trip took the prize for the number of God-timed and God-ordained arrangements.

Plus, the Lord kept me in the best of health, and He preserved us on the road — we witnessed (but didn’t participate in!) two head-on collisions. All thanks to God and many thanks to you all for your prayers.

I fired off many pages of narrative to my wife Denise while I was gone — way too much to condense here.

Perhaps the story can best be encapsulated by sharing my encounters with four Hondurans. Multiple, regular visits have allowed us to establish and grow relationships. God multiplies the fruit from these encounters, and from the teaching and example imparted to the pastors and leaders, and the Holy Spirit then uses them to impact others. 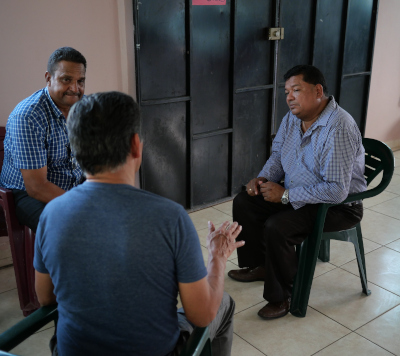 Ilvis and Antonia Chimino were the couple who picked me up at the San Pedro Sula airport on Thursday April 10th. Up to this point, I haven’t spent much time with Ilvis [pronounced Eel-vees in Spanish]. I know he has functioned as the superintendent’s right-hand man for several years. About three-quarters of the way through the five-hour drive to Yoro, we stopped off in a town where another pastor and his wife, Abel and Gloria, live.

During our hour-long visit, I was astonished to hear Ilvis tick off, on all the fingers of one hand, the main points from the Woman in the Kingdom of God series I had finished teaching two years ago. The teaching had made that much of an impact on him!

Ilvis was so clear about how helpful the instruction had been that Abel and Gloria promised to come to the “couples in ministry” seminar starting the next day (and they did!). The teaching, it seems, is not only remembered, but it bears fruit.

Friday the 11th I taught from nearly 9:30 am to 10:00 pm at the Yoro church. I didn’t pick the topic, but it turns out that the “couples in ministry” theme was a very appropriate follow-up to Woman in the Kingdom of God. I especially appreciated the feedback and comments, hearing the experiences of pastors and wives during the afternoon session. 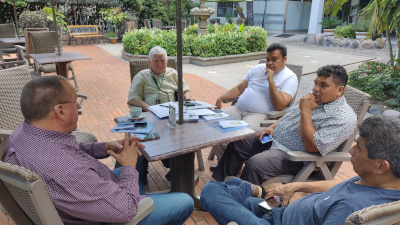 Rony Funes [Row-nee Foo-nays] hit my radar screen early Saturday morning the 12th. He showed up at my door with warm papusas (a Honduran tortilla-wrapped meal-in-itself) and juice for breakfast. Rony, (about 40 years of age) wants to grow in his calling as a Bible teacher. (It turns out I hit his radar screen on my first visit to Honduras. The What's the Context? seminar has kept him motivated in his Bible reading. He told me — and I hope I remember the numbers correctly — that since then he has read through the OT five times and the NT eight times.) To this end, Rony spends about half his time at a rustic training center in an out-of-the-way rural location called La Joya. We got acquainted over breakfast while we waited for Superintendent Antonio Rodriguez and Cristian, another student at the training center, as they prepared for our four-hour drive from Yoro to La Joya. 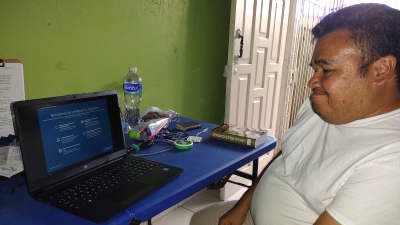 As a result of his new coordinator position,
Rony received a new English-language laptop. My responsibility was to convert the operating system into Spanish, get Rony his first e-mail address, and train him on the basics of how to use everything… all in less than four hours.
(That may be the biggest miracle of the trip!)

Rony (who could well be nicknamed La Esponja — The Sponge) and Cristian (and others, like Raúl and Bessy and José) are getting hands-on training in evangelism, soul-winning, church planting, and Bible-study basics at La Joya. We spent many hours around the makeshift meal table talking about ministry, Bible study, and matters pertaining to the Kingdom of God. These upcoming leaders and pastors have a deep thirst for understanding truth in Scripture, and walking in the things of the Spirit.

Rony followed Antonio (who believes in close-proximity-do-what-I-do kind of discipleship) to Tegucigalpa, partly to hear me teach. What an extraordinary opportunity it was to invest in Rony’s life and the lives of other young men (and a young woman) at the training center, who have callings on their lives. Men like Rony learn not only from what we say, but from how we teach, how we handle the Scriptures, how we interact with others, and how we deal with challenges. 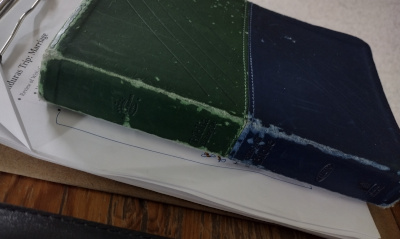 At first, I didn’t recognize this beat-up Bible. Then I did a double-take. It’s the “new” bilingual Bible I gave to Joel after our first round of ministry together in 2017 was complete. You can see that he’s made really good use of it! 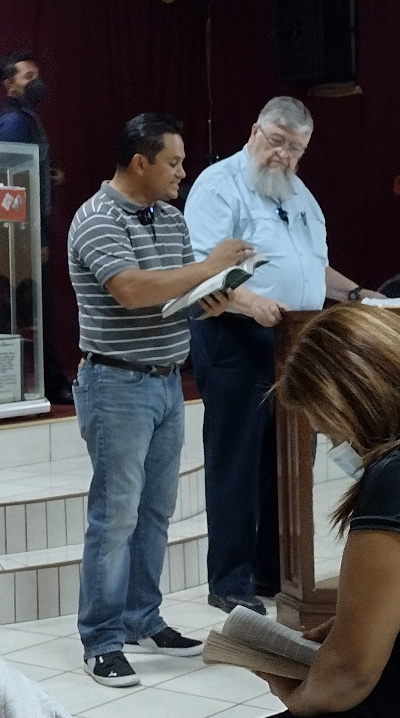 Joel translating for me in Nueva Capital, where I taught on The Secret of Elijah. That was the first message that “El Ladrón” “stole” from me!2

Then there’s the growing fruit of multiple encounters. If I were going to give Joel Aguilera, my interpreter during my week of teaching in Tegucigalpa, a nickname, it would be El Ladrón — The Thief! No, don’t take that negatively! Joel (pronounced Ho-ale in Spanish) has helped me by translating every time I’ve taught in Honduras, and in the process his Bible understanding has grown tremendously.

Starting Wednesday evening, after two nights of teaching the “pastoral couples in ministry seminar” (once again blessed by the Holy Spirit), Joel went with me to a different church each night. At La Cuesta, he had a post-teaching follow-up question that the Holy Spirit used to spark the subject for Sunday afternoon’s teaching at the same church. Thursday night, at Nueva Capital, he was so excited by the subject that several times he interjected enthusiastic comments to me during the teaching. As we began the drive “home” for the evening, it wasn’t five minutes until Joel said, “Pastor, I’m stealing that message and preaching it in my church!” The next night after the meeting, the first thing he said when he hopped in the truck was, “I’m stealing that one, too!” Saturday night, he didn’t even wait until our departure; as soon as we sat down, before the meeting was even over, he just snatched my notes and took a photo of them with his cell phone. (“Stealing”? Hardly! We teach faithful men who are able to teach others also!)

Joel’s comments (quite aside from regular announcements of new “thefts”!) keep echoing in my mind. “Other teachers come, but they minister the same message in every church they visit. You have a different, Spirit-tailored message for every church you teach in.” (When we learn “what the Spirit says to the churches,” it’s a different message for each church, isn’t it?) “You said that the Lord showed you what to share this morning, and that you haven’t preached that message for 40 years. Not only does that word confirm something the Lord showed me during my quiet time this morning, but it also means that the Lord showed you that truth two years before I was born!” (I can’t help it if I’m old!) 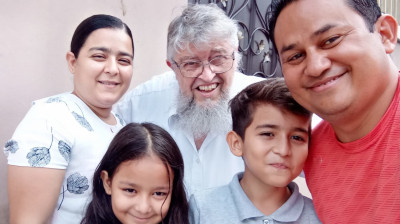 Left to right:
Lorena, Michelle (10), some old, wind-blown gringo, Eliezer (12), and Joel after a Chinese lunch together on Día del Padre (Father’s Day) 3

I took Joel, his wife Lorena, and their two kids to lunch Saturday, just to get to know them better. Sunday morning, almost immediately after I finished preaching at Iglesia Central, Joel snatched me away and took me to lunch to ask questions and pour out his heart. (Who can resist a hungry “thief” who pays for lunch?) Sunday afternoon at the La Cuesta church, he brought his entire family, including his pastor-father, Rodolfo.

As Joel accompanied me through several days of Holy-Spirit-led teaching, ministering to individual church folks, answering questions, counseling, and praying for people, I realized more clearly than ever what God has been up to — unintentionally I’ve been mentoring Joel over the last five years. 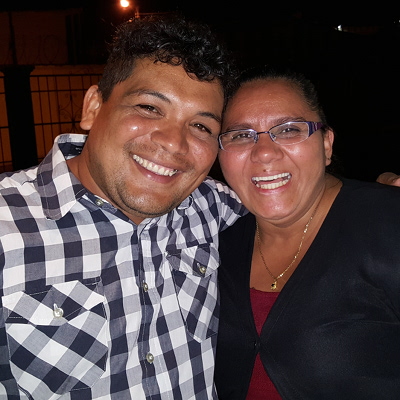 My all-time-favorite photo
of Angel and Marina Alvarez

Some encounters grow into lifelong friendships. As a case in point, I’ve saved Angel [Ahn-hale] and Marina Alvarez for last. Since we met in 2017, he’s been my “trip manager” in and around Tegucigalpa, Trojes, and even a side-trip to El Salvador. On this visit, once again we were constant companions for a week, sharing together over rides to the various churches visited, over meals, over coffee, and (as a “victory lap” the last night, after ministering eight times in seven days) over a banana split. Angel shares ministry problems and inter-leader relationship problems with me that would be hard for him to share with others closer to the situations discussed. Largely based on input from Angel and Antonio, I believe I know what I’ll be tackling subject-wise on my return to Honduras, a trip that may come as early as this coming September, Lord willing.

What your gifts provide is far more than just teaching and preaching. I think the deeper, largely unseen personal fruit for the Kingdom is in what happens during these encounters as we build relationships over the years.

Momentum in The John the Baptist Experience 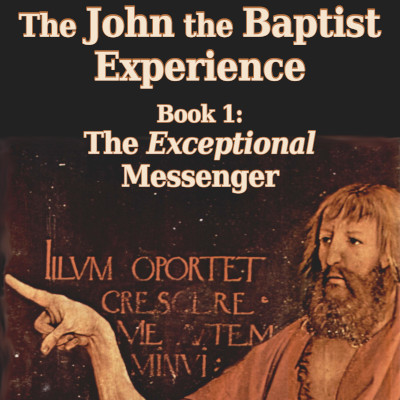 We haven’t had time yet to address the artwork…4

Even during the Honduras trip, I managed to sneak in some writing during the early-morning hours before others rose (actually finishing a chapter from Book 3 of The John the Baptist Experience series). We posted four new chapters or “deeper dives” for Book 1: The Exceptional Messenger in March:

And now two more Deeper Dives are queued up to appear during the month of April:

Your feedback on any or all of these chapters and “deeper dives” is appreciated. The final two chapters — Squaring John with Elijah and The Angel and the Speechless Priest Prophesy — are in the final-draft stage and still slated for posting in May and June, respectively. Everything seems to be on schedule for the entire e-book version to be available by the end of June and the paperback by the end of July. Continued prayer is appreciated for Holy-Spirit-inspired writing as I work on this book. 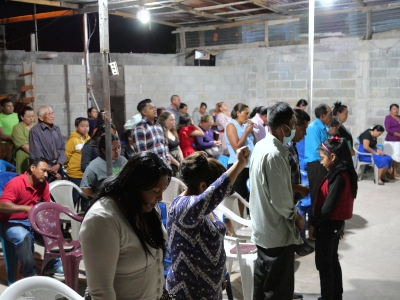 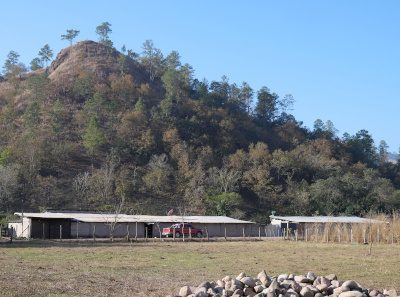 Is there rest in the Lord? Amen, there is. And it’s a good thing, too, because there’s not much “rest” built into my itinerary for the next two months!

Feel free to send your prayer requests to us, as well. Thank you for your faithful prayer coverage and support. They make the teaching meetings, and encounters such as these, possible and fruitful.

Previous post: Open My Eyes That I May See