Heart-Talk for the New Year 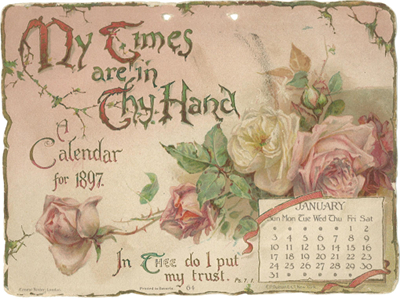 Sowing and reaping is the same in any century!

Now that the New Year is fairly inaugurated and getting used to the measure of its pace, you want to know how I find the going. Well, it might be far worse than it is and has been. I find I set the pace in more or less the same gait I assumed last year. The old year harvests its aftermath in this. I cannot unmake what I have made, simply because a new year has made its advent. The new has a winter, during which I must live on last summer’s product. We do not get rid of the old in a day, nor change the order of life by hanging up a new calendar. So I find the overlapping of the old so thick that up to this date I scarcely distinguish the one from the other. More and more I see that our marking of time is all artificial and but a matter of convenience. This ongoing life is not a matter of times or seasons.

I see it would be well for us to enter a new year all up-to-date in every respect. If we have no old debts to pay, no old accounts to trouble us, and no past failures to burden memory and drag along in various ways; and if we have none of the old temptations to follow along by the side of our pathway like David’s enemy, casting dust and throwing stones,2 we will have easier going. The disabilities in various respects affect our soul progress, much as does a lame limb that impeded progress in December make us halt in January. If we so could manage it that none of the old lumber of the past year need be carried over with us into the new, we would strike a new and better speed of going at once.

I find that if there was a weak will in the past, the new year does not change it. Nor do the disadvantages of an ill-spent youth, and neglect of either mental or moral education vanish with the coming of another year. These follow like many other damages of life received in the days of sin, which like scars remain long after the hurt has been healed. While grace drives victoriously along the way in spite of all these things, yet grace comes to carry only such a craft as we provide. Grace does not furnish brains, nor brawn, nor bones. Nor does it furnish education nor forge habits of study without necessary time and drill. It furnishes the best conditions for building character, but we do the building. If we did not repair a leaky roof last year, the April rains will reveal the fact. If character is not rock-based, the coming storms will find the sandy foundation.3 If we were not faithful in Bible study last year, we are at just that amount of loss as we take up the labor of the new year. So the failures of last year cast their shadows over into this.

On the other side, I see the victories of last year carry their new forces of life and courage into this. Life is greater today because of the victories. The new light in which we have walked leads to increased light today. Hallelujahs help to multiply hallelujahs. Victories aid in gaining victories. The cumulative forces of life continually rally their combined powers to aid us in reaching the goal. As they do, defeats become fewer, temptations seem to lose their persuasiveness, and life blooms and buds and fruits at a thousand new points. The momentum of grace increases. Holy habits gain power, and it seems more natural and easy to live a holy life, and to go with God. Fear of loss reduces itself to fear of not staying with Jesus. The future carries nothing in it but glory as we go with Him. Thus grace comes in to overdo, and sweep us beyond even an irreparable past, so far as it has any power to affect the ultimate quality of the soul, though I do not say quantity, or measure or magnitude.

While riding along in the train the other day4 I was thinking of these things. I was in that frame of mind when we are not seeing things so much with our eyes, or at all, nor hearing things with our natural ears, nor saying things with the voice; yet I said to Jesus, in the familiar way we talk to Him, “Lord, I want to be a thousand times more like Thee and nearer to Thee in the coming year than in all the past.” Instantly He said, “What if it be the way of the cross?” Then said I, “Then, Lord, I can’t go through unless You hold me up.” The immediate reply was, “I will hold you up, if you can trust Me.” That was all. New responsibility seemed to rest on me. There was also a slight sense of kindest rebuke in it, in the thought that I was somewhat lacking in trust in Him. So I am writing myself anew among the trusters for 1897.5 I am pushing out with hope. I am able for battle as I have not been for several winters. I am seeing the biggest world I ever saw. I am at the best and most glorious parts of our heritage in Christ that I have ever realized. I am as never before set on the “Better things on before!”

Next post: Look, Ye Saints, The Sight Is Glorious

Previous post: There’s Within My Heart A Melody (a.k.a. He Keeps Me Singing)