DD1-3: Greater Works Than These

The John the Baptist Experience
Book 1: The Exceptional Messenger
Deeper Dive #3:
Greater Works Than These1 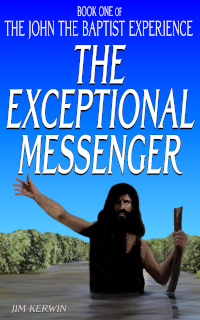 When the imprisoned John the Baptist sent two of his disciples to Jesus, he had one question in mind: “Are You the Expected One, or do we look for someone else?” (Matthew 11:3 nasb). Jesus didn’t answer them directly at first. He believed in “show and tell,” and Luke tells us what John’s two disciples saw with their own eyes:

With the long day’s ministry over, the Lord approached John’s two representatives.

Jesus was quoting two Messianic passages in His reply. For our purposes in this article, it’s the first that draws our attention:

5Then the eyes of the blind will be opened
And the ears of the deaf will be unstopped.
6Then the lame will leap like a deer,
And the tongue of the mute will shout for joy.…
— Isaiah 35:5-6 —

Did the lame actually leap like deer when Jesus healed them while He was here on earth? In the many times I have read through the New Testament, I have noticed with increasing interest how carefully the Lord quotes the Old Testament, the versions He uses, what He includes, what He omits, even where He stops.4 And in His response to John’s inquiry (Matthew 11:5), Jesus is careful not to quote the “leap like a deer” part of the prophecy; He merely alludes to it, saying that “the lame walk.” The fulfillment, the leaping which is still to come, is based on another prophecy —  a promise made by Jesus that we’ll address in a moment.

Nevertheless, I’m sure that those who were “only” walking and not leaping weren’t complaining! They certainly found it surprising and won­der­ful enough that the lame could mi­rac­u­lous­ly be made to walk. (By contrast, we live in an age when we help ac­ci­dent and stroke victims to walk again through physical ther­a­py, and we know from ob­ser­va­tion of afflicted friends, or from first­hand ex­per­i­ence our­selves, that it often takes a lot of time to re-learn the skill of walk­ing. Not so those whom Jesus healed! They walked instantly — no physical therapy, no canes, no walkers, no crutches, no “practice”!)

But let’s take the wondrous surprise a “step” further; no, rather, let’s leap forward in our thinking and appreciation of Jesus’ healing power. In physical therapy, we are dealing with people who already knew how to walk; physical therapy helps them to recover a skill they already had. We don’t think about the coordination and balance and experience it requires for us to walk; we just hike or skip or jog and or run or climb the stairs and take it for granted. But we didn’t take it for granted as we transitioned from crawling to walking as infants; it was a skill we had to practice and master.

With that in mind, let’s think about a pre-Pentecostal promise of Jesus…

…and then direct our attention to the lame man of Lystra (Acts 14:8-10) — “lame from his mother’s womb, who had never walked” (v. 8). Even healed, with the brain-and-limb connection restored, his body had no “muscle memory” of how to walk and balance — he just did it, as part of God’s blessing to him. He even leaped (at least once) before he walked (v. 10).

Speaking of leaping, let’s jump backwards to the lame man at the Temple’s Beautiful Gate (Acts chapters 3 and 4). He, too, had never walked (“lame from his mother’s womb,” v. 2). We also know that the recipient blessed with this healing “was more than forty years old” (4:22). You and I aren’t medical experts, but we’re at least familiar with the concept of muscular atrophy — the wasting away of unused muscles. What was left of this man’s leg muscles after 40+ years? Nothing worth speaking of! See in Acts 3:8 how rapidly the power of the living God comes over him: first he “stood upright” (a simple miracle of balancing for the first time); then he “began to walk” (instant coordination); and finally he entered the temple with Peter and John “walking and leaping and praising God” (those super-atrophied muscles now have strength and endurance — he just keeps jumping)! In a single bound (please forgive the pun) he went from helpless, immobile infancy to Spirit-choreographed assemblés and tours en l'air leading to the grands jetés of a leaping deer. His “physical therapy” (if we dare call it that!) was seconds long rather than the months-long grueling effort of normal P.T. Such wonderfully “unseemly” behavior in the Temple of the Lord — bounding and bouncing and leaping, while praising God at the top of his voice! And all the worshippers that day saw this Isaiah 35:6 prophecy fulfilled: the lame will leap like a deer.

As for the Apostles Peter and John, who were present for this healing, well, at some point the words of Jesus — “greater works than these will he do because I go to My Father” — must have been quickened to their memories, words that John would pen in his Gospel nearly 60 years later. We call it “the promise of John 14:12.” When Jesus, on earth, healed the lame, they walked. Glory to God! But after Jesus ascended and was enthroned in heaven? Through the power of the blessèd Holy Spirit abiding in His believing disciples, Jesus ministered healing to the lame after Pentecost, and they leaped — like deer — accomplishing the fulfillment of Isaiah’s prophecy in 35:6 and fulfilling Jesus’ promise to His believing disciples: “Greater works than these that I have done already, you will do because I go to the Father in order to send the Holy Spirit”! Amen.