God’s Bounties Should Make Us Bountiful

A chapter from the book
Sunnyside Papers: Inspirational Sketches
from God’s “Book of Nature”
by
Isaiah Reid 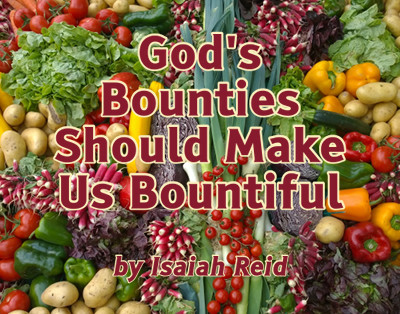 It is November.3 We have had an old-time Iowa fall. The charming weather has been just like a northern Florida winter, save the softness and balminess of the air. But doubtless for Iowa, the atmosphere we have had is better for us than that in Florida would have been. What is all right for one part of the country is not always the best thing for the other. Certainly, our fall has charmed everyone; and could it last, no one would care to go to California or to the Gulf to spend the winter.

Nature has fully made ready for the coming Ice King. The season has ripened everything up into readiness, and the weather has given man a chance to get his work well up to the calendar calculations. The last of the summer birds have left us, and only the hardy stalwarts which can brave the snows and blizzards remain.

But I was thinking more of the wonderful harvests with which we are blessed. This has been a bountiful year. If, as we read, “God’s bounties should make us bountiful,”4 this ought to be a good season to fill up all our benevolent treasuries. It may be that our failure to “count our mercies” is one reason of our illiberality. If God gives a hundredfold for our sowing, ought we not to be willing to give Him back a tenth? The millions upon millions of bushels of corn in this “golden corn belt” can hardly be estimated. The potatoes, the oats, and hay, the fat cattle, and pork, the minor garden products, the increase of the poultry yard, the milk and butter, the horses, and sheep—all these count up beyond man’s power to contain in a land like this northern-central section of our country. There ought to be Thanksgiving times this year such as Nehemiah had in his day—only more so—to harmonize with the exceeding glories of the gospel dispensation.

But I was thinking of a little less territory than the above general view comprehends. I have been finding out that God has been proving that He can give a hundredfold in this fair land of ours. On the Sunnyside acre-and-one-half, He has been doing it more and more, grain for grain, and pound for pound. I have just counted the grains on a fair-sized ear of corn and find it contains 743 grains; some grains at the end had shelled off, so that it is fair to count on 750 grains, at least. This is 750 to 1. Some stalks had two fair-sized ears, and some ears which were much larger than the one I counted, so that 700 to 1 is a very small average for the corn. The potatoes were also well-increased, both in amount, and especially in quality, and give back in return 25 or 30 to 1. The peas, and beets, and radishes, and cucumbers, and tomatoes all do the same, some more, some less. Some of the flowers exceeded everything and broke the record of all else. Some Drummond phlox is still braving the season, and with a few verbenas in a favored situation, advertises to the world that summer, though gone, is not dead. We read that Abraham sowed and reaped that year a hundredfold;5 here we are reaping up to his limit if not more, in many respects.

We have a goodly land. Its fruitfulness is a continued wonder. Our thanksgivings should be in harmony with it. I mean that we should take comfort and joy in the fact that our God cares for the material world in which we live, and that it is our duty to recognize the fact. Some people seem to think that to count God’s material mercies is to drop out of the realm of the spiritual. It is a mistake. God is just as good in His material furnishing for our lives as He is in the spiritual furnishings. He is as much God in the material wealth as He is in the bringing spiritual prosperity. Indeed, I believe it is a constant failure of ours to neglect gratitude to God for material blessings. The mind that does not see God in the material world and note His blessings in His wondrous provisions may well be said to only know Him in part. Such cannot travel with the Psalmist through the world of nature in his volume of poetry, unless there is much of this apprehension of God in all the forms of life, power, and beauty manifest in the material creation. 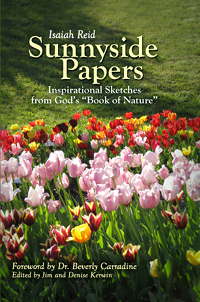 Over 40 devotional messages like this one by Isaiah Reid are available in paperback — Sunnyside Papers:
Inspirational Sketches
from God's Book of Nature.

I have been thinking that if the present dispensation had a plan for taking grain and fruit and annual tithes like the old dispensation,6 it would be a small matter to raise twenty million funds.7 It is difficult for our people to turn the harvest and results of the pastures, field, poultry yard and pork into money. Our conditions of market and sale, the distance to market, and the difficulty of the small grower to obtain good prices and rates make a great shrinkage between what God puts into the hands of the producers and the money they actually receive. If the field value of the foods and grains and stock could all be tithed for God and kept as His and handled as His without the percents for handling, the increase over our present method would be enormous. When God’s hundredfold goes through the hands of the exchangers and the world extracts the heavy percents, the tithe is a pitiable thing.

It is a good thing, however, that one’s right to give thanks does not have to go through the hands of “corners”8 and “Wall Streets.” We can thank, even when we cannot control markets or get fair values for labor expended and harvests received. In the true country home, where no middleman may come in to keep out the cheer, the producer may have the real thanksgiving time of old. The orchard, the garden, the pasture, and the meadow are the natural bounties direct from the giver. So, in no place is the original Thanksgiving more truly and naturally observed.